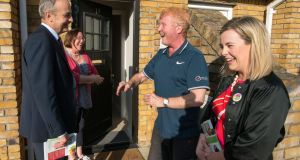 Micheál Martin is on the first of his three canvasses a week. It has developed into something of a mid-week ritual for the Fianna Fáil leader.

He has one rule for canvasses and that is to avoid the “homeland”, or in other words areas packed to the brim with Fianna Fáil supporters.

This is no ordinary political canvass, though.Martin had initially indicated he did not want to be involved in the referendum campaign. Now, he is urging RTÉ to allow him to debate the matter and is canvassing door-to-door for a Yes vote in the Dublin area.

He has been in Dublin South Central with Senator Catherine Ardagh; Dublin Bay South with Jim O’Callaghan; and in Rathfarnham, on a glorious sunny Wednesday evening, it is the turn of local Dublin South West TD John Lahart, Mayo TD Lisa Chambers and Senator Lorraine Clifford-Lee to join him.

In Stocking Wood, an estate of young working families, Martin is learning there is no uniform view on the referendum.

Most of the constituents here are Yes voters but there is a small number undecided and an even smaller number voting No. But the same questions arise on the doorsteps. Why 12 weeks? Could we not amend the Constitution to allow for terminations in exceptional circumstances?

These are, no doubt, questions Martin considered at length before reaching his own position.

“My message to people is to weigh it up. I am not a personal advocate of abortion but I do think there is a balance between having our own views and imposing them on others through a law that is very inflexible and very insensitive and the Eighth Amendment is a very inflexible and cruel law. A lot of unintended consequences have flown from it,” the Fianna Fáil leader says.

“We need to think of women who get a diagnosis of fatal foetal abnormalities. Do we really want to say to women in those situations that you are going to have to go to England?

“Are we saying to young 14 and 15-year-olds you can go to England or you can take the abortion pill without any care from a doctor?”

It was a meeting with four women that changed Martin’s position. The women had received diagnoses of fatal foetal abnormalities and travelled abroad to seek terminations. That conversation and the predicament those women found themselves in moved him to a position he probably never expected himself to be in.

He reminds the residents of Stocking Wood that he comes from a “pro-life position” but after hearing the stories of those and many other women he felt he could not stand by and “visit that trauma on someone else”.

“It is not fair. I accept this is a complex matter but we are compounding their anguish by sending these women – our sisters, daughters, friends, mothers – abroad,” he tells one resident struggling with the 12-week proposition.

As he races from door to door, a number of young children are playing in the estate, a rare sight in Dublin these days. Many of their parents were attending the Ed Sheeran concert in the Phoenix Park, they tell Martin. He tells them he had seen the popstar in Cork and if he is good enough for Parc Uí Chaoimh, he has to special.

The conversations drift from the referendum to football, hurling, the recent CervicalCheck controversy and the behaviour of vulture funds. Martin always tries to bring it back to the vote next Friday. To those who say they are voting Yes, he repeatedly reminds them turnout will be key.

For the undecided, he reminds them of his own struggles with the issue. Having read all of the evidence, he says, he concluded there is no alternative.

For those who are voting No, he is patient. He does not seek to change their minds or force his opinion on them. Instead, he attempts to correct some of the misinformation they have accumulated.

“This is not the United Kingdom. Britain is an outlier in terms of its abortion laws. The comparisons are unfair.

“We were told in 2013 [during the debate on the Protection of Life During Pregnancy Act] that the floodgates would open. It did not happen,” he tells one man who is a strong No voter.

It will come as no surprise to the Fianna Fáil leader that the image of him delivering Together for Yes leaflets and debating the merits of repealing the Eighth Amendment will irk some of of his party’s supporters.

While most of the parties have varying views on the issue of abortion, the division in Fianna Fáil is very public. Thirty-one members of the parliamentary party gathered for a No vote, highlighting the extent of the opposition to the proposal. Its TDs are attending rallies and public events for the anti-abortion campaign.

This is probably one of the reasons Martin made his views known early in the debate. Without any advance warning, he told the Dáil in January he would be supporting the removal of Article 40.3.3 and the legislative proposals.

It was a significant intervention in the campaign. Support for the proposition was expected of Taoiseach Leo Varadkar and the Sinn Féin leadership but not of Martin. In the months that have followed, the party has become fractious, even if the party leader does not want to admit that.

Given that the sun is out and the sound of an ice-cream van is swirling around the estate, we can forgive his optimism about the current state of play in his party.

It may become a trickier situation for Martin if the referendum is passed and legislation is necessary. What of those who opposed the referendum but are faced with implementing its result?

Fianna Fáil will not block any legislation if there is a positive result in the referendum. He sees no reason for delaying the introduction of the law and wants it to be completed by the end of the year.

So would he encourage his party to support the legislation? “I have already said they have freedom of conscience. We can’t have a system that allows free votes and then change it mid-stream. But I would encourage people to support the law.”

He points to the Sinn Féin position, which is currently not in line with the proposals being put forward by the Government. Surely he is worried about the pictures of Mary Lou McDonald on posters across the country?

“That would mean we are putting up posters for ourselves and not the issue,” he responds.

Many people never thought they would see the day that the leader of Fianna Fáil would be canvassing for access to abortion. “This is about the future,” Martin says.