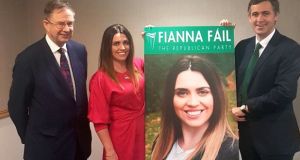 Eamon O’Cuiv TD and Senator Mark Daly with Sorcha McAnespy, who said she would run as a Fianna Fail candidate in next year’s local council elections. Photograph: Fianna Fáil/PA Wire

Fianna Fáil leader Micheál Martin has removed Galway West TD Eamon Ó Cuív from a senior frontbench post after he was involved in an attempt to launch a candidate to run for the party in next year’s Northern Ireland local elections.

The pair met on Wednesday and Fianna Fáil released a statement on Thursday announcing Mr Ó Cuív’s departure from the frontbench. Senator Mark Daly had been removed from his position as the party’s deputy Seanad leader over his role in the same event.

It is understood that Mr Martin was prepared to leave Mr Ó Cuív in position. Party sources initially said officials had carried out inquiries into the Northern Ireland launch and concluded Mr Ó Cuív was not the main organiser.

Rather, it was suggested he had attended on the understanding that the evening in Omagh was focussed on Brexit.

However, he is said to have informed Mr Martin during their meeting that he was indeed aware that an election launch was planned. Sources said this left Mr Martin with no choice but to remove him from the frontbench.

Mr Ó Cuív did not return calls but posted a tweet in Irish after the announcement stating that he accepted it was a matter for Mr Martin alone to choose who will be on the frontbench of Fianna Fáil.

“I won’t be making any additional comment on this issue and the media should direct any questions on the subject to the Fianna Fáil party,” he said.

It is the second time Mr Martin has removed Mr Ó Cuív from a senior party position. In 2012, he was effectively sacked as deputy leader for openly defying the party’s support for the fiscal treaty referendum.

Mr Martin and Mr Ó Cuív – a grandson of party founder Eamon de Valera – have an uneasy relationship, with the Galway deputy one of the most prominent anti-abortion TDs during the recent referendum. Mr Martin was in favour of repealing the Eighth Amendment.

Supporters of Mr Ó Cuív also attempted this summer to install him as the Fianna Fáil candidate for the presidency, in defiance of Mr Martin’s endorsement of Michael D Higgins.

Mr Ó Cuív and Mr Daly attended the election launch of councillor Sorcha McAnespy, who is an independent councillor on Fermanagh and Omagh District Council a number of weeks ago.

She was unveiled as the Fianna Fáil candidate for the Northern Ireland local elections at the event, but party headquarters later insisted no decision had been taken on “whether or not it will contest elections in the North”.