‘The people wouldn’t forgive us for another election’ 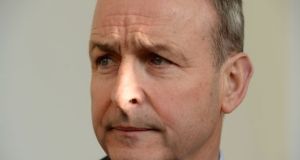 Fianna Fáil leader Micheál Martin has said nothing has been ruled in or out regarding the possibility of a rotating taoiseach if his party and Fine Gael form a coalition government.

Mr Martin told RTÉ Radio One’s Today with Sean O’Rourke show that he was prepared to enter coalition with Fine Gael if a Programme for Government was agreed.

“Whatever government is formed needs to be able to make decisions that will bear fruit. Whatever happens, there needs to be a new direction...there is a mandate for change.”

Fine Gael and Fianna Fáil met for talks on policy on Wednesday.

There is no pathway to Opposition, Mr Martin said on Thursday morning. A left-wing alliance was not going to materialise, he added.

Mr Martin said that nothing that he had heard back from the talks with Fine Gael was insurmountable.

He said he wanted to negotiate a Programme for Government that would last five years.

“A government will be formed, the other political parties need to make decisions.”

Mr Martin said he was not afraid of another election in the event that there was a failure to form a government. Fianna Fáil had come very close to winning more seats in a number of constituencies, he argued.

However, he said the people would not forgive politicians if there was another election.

Mr Martin said health was the issue of most concern to him. “There are urgent initiatives that are doable and deliverable — in Emergency Departments, with the National Treatment Purchase Fund, with bed capacity. We cannot do everything, we need to pick key areas on which to focus.”

When asked about the coronavirus, he said he thought that when the Ireland v Italy rugby was cancelled that decision could have been followed up with advice for Italian fans not to travel to Ireland.