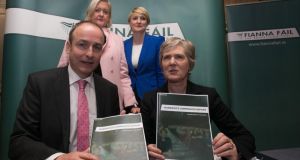 “There are people out there who have worked hard towards this date and who have been very singularly focused as individuals, irrespective of gender, on the date of the next general election.

The move, recommended by the party’s Markievicz commission, will require Fianna Fáil to select between 20 and 27 women candidates depending on the overall number of candidates put forward.

Mr Martin said the national constituencies committee would have the capacity to add candidates to tickets. Fianna Fáil would be running “relatively tight tickets” in many constituencies, he added.

“In many three-seaters we’ll be running one candidate – that may change in an odd one or two. In four-seaters quite similarly, and we’ll have different strategies in five-seaters. It makes it a fairly challenging prospect for the national constituencies committee but we have to do it and I see this statutory obligation as an opportunity to go with the spirit of it.”

Prof Yvonne Galligan of Queen’s University Belfast, who chaired the commission, said following on from the general election the party should work towards selecting at least one woman and one man to contest each constituency. She said the exceptions would be constituencies with two incumbents.

1 Covid-19: Public urged to ‘stay at home’ as 1,025 further cases confirmed in State
2 Transmission of Covid-19 on flight into Ireland linked to 59 infections
3 New Covid-19 contact-tracing regime to be established for schools
4 Two hundred Irish retailers for all your online Christmas shopping
5 Maureen Dowd: Biden the anti-venom for Trump’s poisonous menace
Real news has value SUBSCRIBE