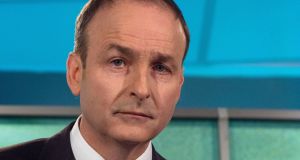 Michael Micheál Martin: “Broadband is as critical as a motorway was a couple of years ago for economic development.” Photograph: Brenda Fitzsimons / The Irish Times

As metaphors go, it was apt – the Fine Gael poster of a gimlet-eyed Enda Kenny urging people to “Let’s Keep the Recovery Going” gradually disappearing from the telegraph poles in Tivoli, at the eastern end of Cork city, and not even making it as far as the Dunkettle Roundabout and points east and north.

It seemed to set the tone for the day’s campaign, coming in the wake of comments by Greencore chief executive Patrick Coveney, brother of Minister for Agriculture Simon Coveney, which questioned how so many people had been “left behind” by “the unprecedented economic recovery” .

The Fianna Fáil leader, Micheál Martin, was in East Cork and all the way down through Carrigtwohill, Midleton, Castlemartyr and Killeagh, Martin’s face smiled down from every pole, with Fine Gael limited to a sprinkling of posters from local TD David Stanton.

Martin was canvassing in Youghal with Barbara Ahern, daughter of former TD Michael Ahern. Barbara’s face could also be found along the roadside, interspersed between posters for Sinn Féin’s Pat Buckley and Independents Kieran McCarthy and Youghal’s own Mary Linehan Foley.

The sun once shone on Youghal, literally and metaphorically. More than 3,000 people were employed in local industries such as Youghal Carpets and Seafield Fabrics and thousands of holiday makers came there for the summer, before the advent of cheap flights to continental Europe.

The October 2010 closure of the Danish-owned Tytex, which made and developed medical textile products in the Springfield Industrial Estate in the town, with the loss of 37 jobs, brought to 2,500 the number of manufacturing jobs gone from the historic walled town since 2000.

So he tramped the sodden streets of a town that once was a thriving manufacturing centre, Martin, whose party was in government for much of Youghal’s long decline, explained that the recovery was “two-tiered” and towns like Youghal were missing out.

“Broadband is as critical as a motorway was a couple of years ago for economic development,” he said.

Accompanied by a posse of fluorescent green-jacketed Fianna Fáil members, Martin and Barbara Ahern enthusiastically took to the canvass. They headed first for Brookes SuperValu, the family trading since the 1880s, where Martin tried his luck with a member of the public.

“I’m a Blueshirt and proud of it,” declared Dick Barry, only for Martin to respond: “You’re the first one we’ve met all day”, before heading off down the supermarket aisle with the Fianna Fáil debutante hoping to regain a seat for the party in Cork East.

So what did Dick Barry think of Micheál Martin? He shook his head.

“As I say, I am a Blueshirt. But you’d never know – we could end up in coalition with him yet. It would be better than relying on a group of Independents if we are to have stable government and see the recovery continue.”