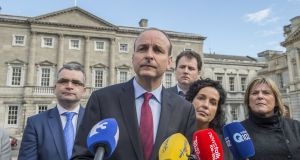 Micheál Martin: “The history of the Irish revolution belongs to no party.” Photograph: Brenda Fitzsimons

Fianna Fáil leader Micheál Martin used a commemoration of the 100th anniversary of Éamon de Valera’s election to the House of Commons in a famous by-election to attack Sinn Féin.

He reasserted at the weekend that his party would not enter coalition with Sinn Féin after the next election.

“The party which today uses the name Sinn Féin has nothing to do with the Sinn Féin which Éamon de Valera so triumphantly led to victory,” he said.

“They are a party founded in 1971 which has never ceased in an effort to try to distort history in the service of an illegitimate campaign rejected time and again by the Irish people.

He said the party led by Gerry Adams “maintain the hypocrisy of claiming the revolutionary Sinn Féin while ignoring” most of its leaders.

“They actually held a centenary celebration of the founding of Sinn Féin without mentioning its founder or the only Sinn Féin leader who ever won the support of the Irish people,” he said of the East Clare by-election of 1917, which saw de Valera elected following his release from detention by the British after the 1916 Rising.

“This is an event proudly organised by the party founded by Éamon de Valera, but let no one be in any doubt, we are not claiming the by-election victory and its significance for Fianna Fáil.

“The history of the Irish revolution belongs to no party. We have no difficulty in recognising that many who contributed to this victory took other paths. We are here today because we want to show our respect and recognition of this great event,” he said.

In an interview in the Sunday Business Post, Mr Martin restated his determination not to enter government with Sinn Féin after the next election. Asked if his commitment would hold under any circumstances, he replied, “Yeah, we’ve made that clear.”

However, he did not rule out entering into a supply-and-confidence agreement with Sinn Féin. Fianna Fáil is currently supporting the current minority Government on certain issues under such a deal.

At the last election, Mr Martin resisted pressure for form a coalition with Fine Gael, having similarly ruled out such a move before the election.

Mr Martin also criticised the Government for an “ideological” reluctance to build social housing on a large scale, and promises that if the present Government will not move towards the construction of developments consisting only of social housing, then a Fianna Fáil-led government will do so, if elected.

He criticised the Government’s insistence that developments have a mix of types of housing.

“We’re going to build houses and to hell with this,” he said. “I am not talking about the 1,000 house estate. I am talking about doing 200 houses in a given location.”