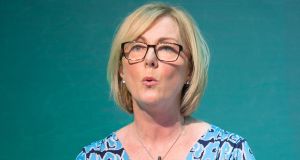 Minister for Social Protection Regina Doherty: claimed Fianna Fáil could not be trusted with the economy or “with the sincerity of actually saying something that people can believe in”. Photograph: Gareth Chaney Collins

Fianna Fáil leader Micheál Martin has accused Fine Gael of trying to goad his party into calling a general election.

Ms Doherty claimed in a media interview last week that Fianna Fáil could not be trusted with the economy or “with the sincerity of actually saying something that people can believe in”.

The Minister also criticised the party during a speech at the Fine Gael presidential dinner on Saturday for its stance on water charges and other matters.

At the meeting on Tuesday afternoon, Mr Martin cited the comments as an example of Fine Gael’s attempts to provoke Fianna Fáil, claiming this was part of a deliberate strategy led by Taoiseach Leo Varadkar.

However he advised his TDs not to react to such comments, insisting it was an effort to force them to the brink of an election.

Housing spokesman Barry Cowen said the comments did not go down well with the party’s membership. It fell to Mr Varadkar to issue a clarification, Mr Cowen added.

However it was agreed to focus on the matter of policy and the meeting agreed Fianna Fáil should move to correct the pension anomaly in next year’s budget.

The measures introduced in 2012 reduced the State pensions of those who took time out from the workforce before 1994 or who worked part-time.

Earlier, Mr Martin told his party’s TDs the Dáil is not functioning and cannot justify taking a break next week. The party leader was met with laughs at the frontbench meeting when he outlined his decision to object to the recess.

The Dáil business committee had already agreed to rise from this Thursday to November 7th for a mid-term break. It will proceed as planned.

The Fianna Fáil leader said he was not impressed by Ms Doherty’s comments but urged the party to be responsible.