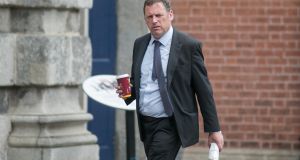 Barry Cowen was appointed a little over a fortnight ago as Minister for Agriculture by Taoiseach Micheál Martin. Photograph: Gareth Chaney/Collins

The dramatic sacking of Minister for Agriculture Barry Cowen last night by Taoiseach Micheál Martin has resulted in one of the shortest-lived ministries in the history of the State.

Mr Cowen was appointed by Mr Martin little over a fortnight ago, nine years after being elected to a seat in the Laois-Offaly constituency, formerly held by his brother and former taoiseach Brian Cowen.

His tenure was not the shortest-lived, however. In 1991 the Donegal North East TD Jim McDaid resigned on the day he was appointed Minister for Defence by Charles Haughey after a picture emerged of him at the wedding of a suspected IRA member, James Pius Clarke.

However, while Mr McDaid’s resignation came following pressure from the opposition, the decision to sack Mr Cowen was one that will be seen primarily as a judgement call by the Taoiseach, and not because of any undue pressure from the Coalition partners, or from opposition parties.

Fianna Fáil TDs on Tuesday night expressed sympathy for Mr Cowen but also pointed to the decisive manner of Mr Martin’s action – he has been criticised for wavering over key decisions in the past.

Minister for Housing Darragh O’Brien said Mr Martin acted “decisively” in seeking to draw a line under the controversy.

“The reality is the Taoiseach has acted decisively this evening, he has acted in the interest of the Government,” he said.

Another Cabinet Minister said he had a lot of sympathy for him on a personal level. “We are into the third week of government and unfortunately it has detracted from the normal work of government.”

In his own statement, Mr Martin pointed to the refusal of Mr Cowen to clarify or elaborate on his statement from last week, especially after a Garda report of the incident was made public which suggested he might have tried to avoid a Garda checkpoint.

Mr Cowen was sacked after he refused to resign, having already told Mr Martin he would make no further statement.

His robust statement and direct criticism of Mr Martin is likely to create further tensions in the party, which has been beset by internal rows since the Government was formed.

Green Party councillor Lorna Bogue said there was “accountability” needed in her party’s response to the controversy, which she said “clearly didn’t take this as seriously as we should have”. Party leader and Minister for Transport Eamon Ryan and deputy leader Catherine Martin had both called for Mr Cowen to answer further questions on the controversy on Monday.

There was disappointment among Fianna Fáil party members in Co Offaly.

“We never needed a Minister at Cabinet as much as now with the Just Transition. We desperately need someone to put the train back on the tracks.

“When I think of the Cowen family in Fianna Fáil I think of the word loyalty, sadly that is lacking tonight,” said the former cathaoirleach of Offaly County Council.

Offaly Fianna Fáil councillor Eddie Fitzpatrick said the sacking was a blow to the organisation in Offaly.

“We were expecting good things from the appointment and were hoping it would work out well for him.”