Group will co-ordinate meetings with other parties and Independents, Fianna Fáil leader says 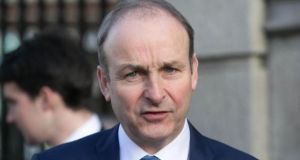 Fianna Fáil leader Micheál Martin said the talks process would not be easy but was a “hugely important one”. Photograph: Gareth Chaney/Collins

Fianna Fáil leader Micheál Martin has announced his negotiating team as contacts between parties continue in an attempt to form a new government.

“As we move from informal contact with a range of parties into a more formal process of negotiation on the formation of a Government, I am pleased to announce the appointment of a Negotiations Steering Group to meet with parties on behalf of Fianna Fáil,” Mr Martin said.

“This group will co-ordinate meetings with other parties and independents and work to develop agreed policy action to deal with the range of crises facing the country. They will also co-ordinate input from the Front Bench and the Parliamentary Party.”

Speaking in advance, Mr Martin said the talks process would not be easy but was a “hugely important one”.

He added: “We will approach the process in a positive, calm and constructive way, as we work to deliver a change of Government and a new approach in the areas of housing, health, cost of living and climate change.”