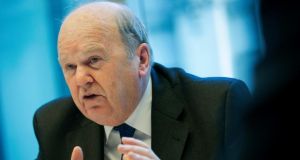 Minister for Finance Michael Noonan has pledged to widen income tax bands as soon as the State can afford it to take people out of the higher tax bracket.

Mr Noonan said yesterday the biggest problem facing the tax system was the low level of pay at which people entered the higher tax rate.

He said in Ireland people started to pay the higher rate on incomes of just €32,800 and this was far lower than in other EU countries.

“If I have the money that is where I will go. I would like to reduce the threshold at which people hit the higher rate,” he told the Association of European Journalists lunch in Dublin yesterday.

Mr Noonan expressed the belief that such a source of action would help to create jobs.

He said the State was moving in the right direction as far as job creation was concerned and the consequent reduction in the budget for the Department of Social Protection could help him do something for ordinary taxpayers in the next budget.

On the question of whether pay rises were now inevitable after years of tight discipline, Mr Noonan warned about the damage industrial strife could do to the fragile recovery.

“I am conscious that people have had it very tough over the past few years. A lot of people have very little left over when they have paid all the bills but we have to manage expectations.

“I know we have learned a lot over the past few years,” he said.

On the current flooding problems arising from the bad weather, he said insurance companies should not refuse cover to people who had been affected.

He said more money would be spent on defences and he pointed to the fact that Clonmel and Kilkenny had not been affected this time due to the money that had been spent on flood defences.

Mr Noonan pointed out that yesterday was the anniversary of the Government decision on the promissory note that had effectively reduced the State’s debt and rescheduled the repayments.

“I believe this is the most significant event that led to the recovery that is now under way,” added the Minister, who said it provided the necessary reassurance to investors that the State would not be overwhelmed by its debt burden.