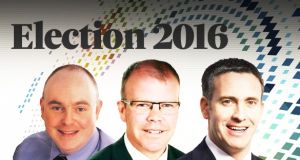 Shane Cassells of Fianna Fáil arrived at the Meath West count centre in Trim a little before 5.30pm on Saturday, both arms in the air and a look of relief on his face as the returning officer declared him elected.

The 37-year-old had been battling for a Dáil seat for years. He lost out to Fine Gael’s Shane McEntee in a byelection in the old five-seater constituency in 2005 triggered by the departure of John Bruton as EU ambassador to the US.

First elected to Navan Town Council in 1999, Mr Cassells is a member of Meath County Council since 2004. He has served as mayor of his native Navan twice and has a high profile locally.

Early tallies showing him topping the poll at 27 per cent effectively sealed the fate of outgoing Fine Gael TD Ray Butler by early on Saturday morning.

Sinn Féin TD and finance spokesman Peadar Toibin trailed Mr Cassells by only about 1,000 votes, putting him on 25 per cent of the ballot.

Mr Toibin was declared elected on the second count at about 7.30pm, exceeding the quota of 9,652 by 61 votes. Independent candidate John Malone was eliminated.

The fifth count eliminated independent candidate Trevor Golden – who polled a total of 2,616 votes – and the Green candidate Mr McMenamin with a total vote of 2,178.

At the end of the fifth count, just Fine Gael’s Damian English and Mr Butler remained in the race for the third and final seat, but there was never any prospect of Mr Butler closing the gap.

English lined up for media interviews by about 10.15pm on Saturday night and was finally declared elected on the 6th count shortly before 11pm, cheered by a couple of dozen supporters and family members.

Few people remained at the count centre at that stage - the Fianna Fáil and Sinn Féin supporters having long departed.