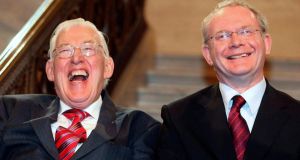 A file photograph showing Northern Ireland first minister Ian Paisley with his deputy Martin McGuinness smiling after being sworn in at a ceremony at Stormont in May 2007. Photograph: Paul Faith/PA

Northern Ireland’s Deputy First Minister Martin McGuinness has signed a book of condolence for Ian Paisley following his death at the age of 88.

The former IRA commander was among those who paid tribute to a man once known as Dr No who eventually embraced the peace process and power-sharing with Sinn Fein.

Signing a book of condolence in Derry, Mr McGuinness wrote: “In rising above old enmities, we pointed the way to a better and peaceful future.

“The peace process and I have lost a friend.”

Dr Paisley was a fundamentalist Protestant preacher and polarising figure whose vehement opposition to dealing with the IRA and extreme anti-Catholic rhetoric was legendary.

The bellicose symbol of unionist defiance was famous for bellowing ”never, never, never” during a mass protest against Irish Government involvement in Northern Ireland affairs in the 1980s. He helped wreck earlier attempts at political accord, became the ultimate protest figure and promised to smash Sinn Féin.

But, in a potent symbol of the ground covered by political negotiations which largely ended violence, he entered government with republicans in 2007 as Stormont’s first minister after republicans lent their support to the police.

Eventually his partnership with Mr McGuinness at the head of government led to them being dubbed the Chuckle Brothers.

”Although ours is the grand hope of reunion, naturally as a family we are heartbroken.”

Dr Paisley was treated in hospital in the past, notably in 2012 for an unspecified heart problem.

Baroness Paisley has said his funeral will be private but a public memorial event will be held later this year.