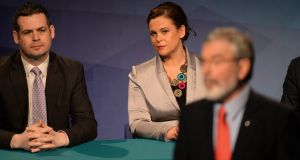 Sinn Féin’s decision to effectively collapse the Northern Executive comes at a time when the party is at a significant crossroads, facing two major challenges which have preoccupied the thinking of senior members in recent years.

The first is the generational transition of the leadership. The second is the daily struggle to maintain the coherence between the Northern and Southern wings of the party.

Inevitably, these questions have become the focus of public debate on the continued leadership of Martin McGuinness and Gerry Adams. However, they are about more than that.

Both men’s roles are threatened for different reasons. Adams is continually dogged by the echoes of the conflict and by his alleged role in incidents during the Troubles .

Perhaps because of his almost universally disbelieved claim that he was never a member of the IRA, Adams has never achieved the equanimity with the past that McGuinness has. It is partly because of this that it was often thought Adams would be the one to step back first.

McGuinness’s health problems have ordained differently. He says he will say next week whether he will stand in the elections, but his gaunt appearance and the weakness in his voice recently shocked the party.

Sinn Féin TDs offer curt one-line answers when asked about the succession and the prospects of McGuinness returning to office or even whether he will stand in the forthcoming elections. Privately they express the hope he will return, rather than the expectation.

Perhaps as a consequence, some party sources openly speculate that Donegal TD Pearse Doherty may move North, perhaps contesting a seat in Derry. Or maybe it is more likely that Adams may return to Belfast, leaving Dublin Central TD Mary Lou McDonald to assume the leadership of the party in the Dáil, while he would retain the party presidency.

Certainly, the departure of McGuinness from the stage is likely to scotch any plans for Adams to retire in the immediate future.

McDonald remains the overwhelming favourite to succeed in Dublin. It is most unlikely she would be knocking around the place telling reporters that she would be a candidate for the job unless the succession had been preordained.

Sinn Féin makes much of its “communal leadership”, where a broad group of elected representatives and advisers arrive at decisions after internal debate and discussion. This is true, up to a point.

However, the fact remains that the communal leadership is made up of the Adams-McGuinness axis and their allies, some of them in the former IRA leadership in Belfast and then the younger generation. It doesn’t take an in-depth knowledge of the republican movement to figure out who the decisive voices are in this process. But that balance is changing.

We have known for some time that the handover to the younger generation had to happen sooner or later; that, after all, is the way of the world. Events are now forcing that process to begin.

Just like everywhere else, politics in the North is changing. Even the sectarian certainties of the six counties will not be immune to the forces sweeping across western democracies. Sinn Féin has profited from those forces in the South, capitalising on opposition to austerity.

Sinn Féin’s problem is one of political positioning as much as one created by the political architecture of the island. In the North, Sinn Féin is an indispensable part of a broadly centrist coalition government which it shares with a “far-right party” (in the words of one of its most senior members). In the South, it won’t contemplate coalition with either of two broadly centrist parties, preferring noisy left-wing opposition.

The solution advanced by some in the party is to double-down on left-wing politics and united Ireland nationalism. In the prevailing political atmosphere, neither seems likely to advance the long-held goal of being in government North and South.