McGuinness apologises to family of garda killed by IRA 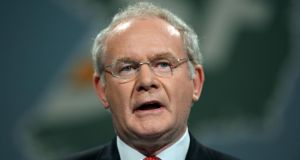 Sinn Féin’s Martin McGuinness has apologised to the family of a garda killed by the IRA in 1980. Photograph: Alan Betson/The Irish Times.

Sinn Féin’s Martin McGuinness has apologised to the family of a garda killed by the IRA in 1980, after a plaque in his honour in the Wexford Opera House was taken down for the duration of the Sinn Féin ardfheis.

Det Gda Seamus Quaid was shot in October 1980 when he stopped a van at Cleariestown, Co Wexford while investigating robberies.

Driven by a member of the IRA, the van contained explosives when searched and Garda Quaid was shot.

A plaque in his honour was put up in the Opera House and the Garda’s family asked that it be taken down because of the Sinn Féin ardfheis, which takes place today and tomorrow at the venue.

But he said: “I’m a leader of Irish Republicanism and I absolutely do apologise to the Quaid family.”

Speaking before the start of the two-day conference, he said the IRA during the peace process apologised to all innocent victims.

“Garda Quaid was an innocent victim. So it’s absolutely appropriate that Republicans should apologise for what happened to him and apologise directly to his family.”

He added: “Obviously if the family wish to speak to us we’d be more than willing to have that conversation.

“From our perspective we recognise there was a very long conflict on the island, specifically in the North and people south of the border were also affected by it.

“And I think it’s appropriate that where people lost their lives apologies should be made, apologies have been made and I think they’re heartfelt.”