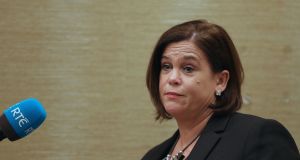 Sinn Féin leader Mary Lou McDonald has emphasised how achieving a united Ireland will be a priority in the continuing talks to form a government.

In a speech in Belfast on Saturday, her first in the North since the general election, Ms McDonald accused Fine Gael of posturing on a united Ireland while claiming that all Fianna Fáil delivered on the subject was “waffle”.

She referred to the efforts to establish a coalition government but laid particular emphasis on achieving a united Ireland.

“All of our candidates proudly declared that they are United Irelanders. No equivocation - no ambiguity - no room for doubt,” she said in an address to Sinn Féin’s Six County annual general meeting.

“This is who we are. We are United Irelanders. So, be assured that in all of our discussions with other parties about agreeing a programme for a government, the desire and demand for unity is a priority.”

Ms McDonald said Sinn Féin was the only all-Ireland party resolutely committed to unity. “Fine Gael postures as the ‘United Ireland’ party but has no strategy, no programme and no real desire to bring unity about,” she told supporters in the Balmoral Hotel in west Belfast.

“And as for Fianna Fáil, the so-called republican party, Irish unity doesn’t rate a mention in its manifesto’s five core aims...Its idea of a plan for unity is to establish a unit within the Department of the Taoiseach to study and consult on a green paper about the handling of a unity referendum ‘should circumstances arise’.

Ms McDonald said the “political establishment of Fianna Fáil and Fine Gael” could not block the “growing demand” for unity.

“Over half a million voters endorsed Sinn Féin’s manifesto, including our plan for unity. Sinn Féin is a United Ireland party. We know that unless partition is ended it will be impossible to build the Republic envisioned in the 1916 Proclamation.”

She repeated that unionists “have nothing to fear” from unity.

“Of course some of them may see that differently. But the answer to that is to talk. We got the power sharing government back because we talked. We will get an agreed shared Ireland in place because we talk.”

Ms McDonald said that the “future will see an end to partition and the achievement of unity in our time”.

She exhorted supporters to hold their republican principles dear. “Keep believing that we can achieve the Republic because is within sight,” she said.

Ms McDonald said Fianna Fáil and Fine Gael were “determined to keep us out of government” and that Micheál Martin planned to “deny the people what they voted for”.

“That is an arrogant and untenable position, given the strength of Sinn Féin’s mandate,” she said.

Ms McDonald said Sinn Féin “won the election”. Standing in front of a banner stating ‘Time for Unity’, she added: “Never again will a general election be pitched as a simple choice between Fianna Fáil and Fine Gael. Just as the unionist majority here in the North has gone, the two-party system has been consigned to history.”

She said those engaged in such threats had “no politics, no strategy and nothing to offer”.

“They are at war with their community and are now threatening political representatives who serve the people,” she added.