May timetable for abortion referendum - Tánaiste 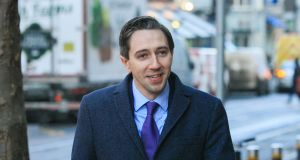 Minister for Health Simon Harris says “detailed consideration” would be given to the findings of the Oireachtas committee’s final report, due to be published on December 20th. Photograph: Gareth Chaney Collins

The Government is working to a timetable for a referendum on abortion in May, Tánaiste Simon Coveney has said.

He said most of the work on the Bills is expected to be completed by mid-March and he appealed to TDs to show leadership, with a respectful debate on an issue that “will divide households”.

The Tánaiste said, however, that while the committee had voted it had not yet published its report, due next week. He added people should wait to read the report in full before making judgments.

He said the committee’s report had to be debated and this would take place in January.

Three of the anti-abortion members of the Oireachtas committee on the Eighth Amendment have said they will boycott the final meeting of the committee on Thursday.

The three TDs met to discuss their next step and agreed not to attend the meeting, which will vote on their final report.

The Oireachtas committee on the amendment yesterday concluded a number of significant changes should be made to Irish abortion laws.

Among its proposals are repealing article 40.3.3 of the Constitution and allowing the Oireachtas to legislate.

It also agreed abortions should be permitted when a mother’s life, health or mental health is at risk, and up to 12 weeks without restriction.

Compassion should be shown to families who receive a diagnosis of fatal foetal abnormalities and terminations should be made available to them, the committee said.

It agreed gestational limits should be based on medical advice and provided for in legislation. Two clinical physicians would be required before a termination is granted, it found.

Friends of Savita Halappanavar, who died in 2012 after a miscarriage, welcomed the decisions of the committee.

Dr CVR Prasad said Ms Halappanavar ’s friends hoped the decisions would be carried through by voters in the forthcoming referendum.

However, Independent Senator Rónán Mullen, who is a member of the committee, said the proposals were akin to “abortion on demand”.

The committee’s recommendations will be contained in its final report, which will be published next Wednesday and forwarded to the Oireachtas for consideration.

Minister for Health Simon Harris told The Irish Times “detailed consideration” would be given to the final report’s findings.

The report will be debated in the Oireachtas in the new year and legislation to hold a referendum will be introduced soon after.

Taoiseach Leo Varadkar has stated his preference for a May date, which would require a referendum Bill to be published by January 24th. If it is delayed until June, a Bill would have to be outlined by February 14th.

The Cabinet will also examine the committee’s recommendations informally next week, but no decisions will be taken until the new year.

While the Government is not bound by the report of the committee, it has said it will be guided by its recommendations. In the event that it accepts the committee’s proposal to allow abortions up to 12 weeks without restriction, the legislation would allow for a GP-led service to be introduced.

It is understood a woman would be asked to see her doctor, a three-day wait would be required, after which an abortion pill would be provided.

The Department of Health has also prepared legislation to decriminalise abortion and to allow for abortions in the cases of fatal foetal abnormalities. Gestational limits have not been included as this will be a decision for the Government to take, it is understood.