Inside Politics: Ireland has lost one of its political giants after his untimely death 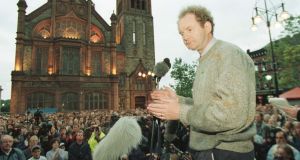 The shock of Martin McGuinness’ early death is still raw. Announced just after dawn this morning, Ireland has lost one of its political giants, whose place in recent Irish history is assured.

Since those very stark images of a clearly sick and feeble McGuinness were broadcast in January, people were fully aware that he was battling against a serious condition.

1 Trump says, ‘I have the best words.’ Now this comedian’s going viral for lip-syncing them
2 We need to pay very close attention to what is happening in Britain now
3 Sideline Cut: Vignette shows why Bird is the true shark in The Last Dance
4 Irish planning for no-deal Brexit to restart as EU-UK talks go badly
5 Covid-19: Two-week quarantine period for arrivals into State could be lifted for some
6 What do you do when you meet a bear on a walk? Copy this 12-year-old
7 Coronavirus: Schools should reopen in early stage of lifting lockdown, HSE experts say
8 The momentum behind calls to ease lockdown may become irresistible for politicians
9 Brazilian gang held in Offaly had sub-machine gun and student visas
10 Emily Maitlis thanks BBC viewers for support after Cummings row
11 Miriam Lord: Reluctant Halligan bangs the nail on the head
12 All students will not return to school even if social distancing rules are relaxed – McHugh
13 Miriam Lord: Taoiseach is trapped in a Zoom session from hell
14 Maria Bailey takes action against newspaper over ‘swing gate’ coverage
15 Tempted by a weeknight barbecue? Here’s how the pros turbocharge their grilling
16 Bake-off: Matt Damon bids farewell to bakery as he prepares to leave Ireland
17 Boris Johnson had little choice but to back Dominic Cummings
18 ‘It would be such a shame if Ireland were to lose its beautiful native tongue’
19 Archaeologists are ‘quite sure’ they have found Red Hugh O’Donnell’s burial place
20 Girl (5) flown to hospital after lilo drifted mile offshore
21 Coronavirus: Universities plan to limit student access to campuses
22 Trump announces clampdown on social media companies
23 Starmer hits home with measured attacks on Tory pandemic record
24 Airport arrivals on quarantining: ‘Fourteen days for me is fine. There’s an end date’
25 'Dangerous' student stalker sentenced to seven years in jail
26 French Custard Flan: Pastry plus custard should not taste this good
27 New rules for arrivals to Ireland start today - what is changing?
28 Rural Ireland ‘has nothing to fear’ from the Greens, FG councillors are told
29 Covid-19 lockdown must be eased to avoid Ireland returning to the 1980s
30 Kinahan cartel ‘foot soldier’ jailed over failed plot to murder Patsy Hutch
31 ‘Since coming out of lockdown I’ve been a mess, and I miss my children’
32 Fintan O’Toole: Donald Trump has destroyed the country he promised to make great again
33 Ricky Tomlinson’s criminal convictions to be re-examined
34 Church closes its doors after flouting public health rules
35 Netflix has revealed its most-watched content. You might be surprised
36 Britt Ekland: 'The Bond girl of my era exists no more'
37 It’s time for summery food. Here are four easy dressings that work for every salad
38 Why is a German court undermining the European Union?
39 Donald Trump has one last chance to ensure his re-election
40 The human cost of Covid-19: Ireland's care homes with the most deaths revealed
Real news has value SUBSCRIBE