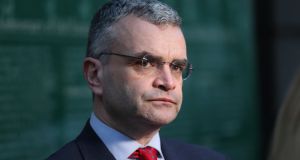 Taoiseach Micheál Martin has appointed 18 members of the Fianna Fáil parliamentary party to a range of spokesperson positions.

Fianna Fáil said the decision was taken to “support and enhance the ongoing development of party policy and advance the delivery of key programme for government objectives.”

Dublin Bay South TD Jim O’Callaghan has been appointed as the party’s spokesman on justice matters. Many in the party believe Mr O’Callaghan could be a frontrunner in any future leadership election. It is understood that Offaly TD Barry Cowen refused an offer of a position in relation to climate action.

Mayo TD Dara Calleary, who stepped down as minister for agriculture earlier this year in light of his attendance at a golf dinner in Clifden, has been appointed as the party’s spokesman on social protection. Limerick TD Willie O’Dea has been appointed spokesman for finance.

Niamh Smyth, the chair of the Oireachtas committee on Media Tourism Arts and Culture, has been appointed as the spokeswoman on arts and culture.

Clare TD Cathal Crowe will be the spokesman for tourism and aviation.

Kildare North TD James Lawless has been appointed as a spokesman for media, communications networks and digital policy. As was previously the case, the Dublin Bay North TD Seán Haughey will be the party’s spokesman on foreign affairs. Carlow-Kilkenny TD Jennifer Murnane O’Connor will be appointed as the spokeswoman on children.

Dublin North West TD Paul McAuliffe will be the spokesman for local government, electoral reform and councillors liaison. Dún Laoghaire TD Cormac Devlin will be the party’s spokesman on Dublin as the party seeks to build on its popularity in the capital.

Outspoken TD Marc MacSharry will be the party’s spokesman on higher education.

“All spokespeople will work collaboratively with Fianna Fáil Oireachtas Committee Chairpersons, Ministers and Ministers of State in their respective departments and will ensure cohesive progress on the recently established party policy groups,” a party statement said.