Martin and Varadkar reject idea of coalition with Sinn Féin 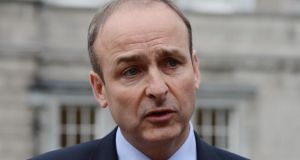 Micheál Martin said he had a huge issue with some in Sinn Féin calling those who took part in the Boston College oral history project “touts and informers”. Photograph: Alan Betson

Fianna Fáil leader Micheál Martin has said his party will not go into Government with Sinn Féin, while Minister for Health Leo Varadkar said he “cannot envisage” a Fine Gael-Sinn Féin Coalition.

The pair were taking part in a debate on restoring “trust between governors and the governed” at the MacGill Summer School, in Glenties, Co Donegal, last night alongside Sinn Féin deputy leader Mary Lou McDonald.

Ms McDonald, for her part, said Fianna Fáil and Fine Gael should “kiss and make up” and end the Civil War politics between the two parties.

The comments were made in a question-and-answer session, with moderator Seán O’Rourke asking about different coalition permutations following the next general election. While Mr Varadkar and Mr Martin did not directly address queries about whether their parties will share power, they were more definitive about Sinn Féin.

“I can’t envisage a Coalition between Fine Gael and Sinn Féin,” Mr Varadkar said, citing its past, as well as its current policies.

Mr Varadkar said that politicians must trust the people before they can earn trust in return, adding: “Time and time again, politicians fail to trust people. We tell them that you can have a school in every village, a university in every large town.

He added: “Until Sinn Fein trusts the people with the truth about its own past, it can never expect a majority of the people to trust it on the key political issues of our time.”

Policymaking must be reformed to restore trust in policymaking, he said, claiming that “governing is essentially a closed circle”.

Ms McDonald said trust in politics had been undermined because it is “run by an insider class and corrupted by cronyism”. “If society is divided between the ‘haves and have nots’, where the entitled few hold sway, little wonder that trust is shattered,” she said.

The crash was a further blow, she argued, claiming that as “austerity began” as former ministers retired with “big pensions”.