‘Yes I do!’ Limerick lady wastes no time with marriage proposal

‘Katie, we make a great team. I don’t want to waste another minute of my life without you as my wife’

At the Limerick count centre today Billie got down on one knee and proposed to Katie. "I love you inside and out, head to toe I don't want to waste another minute of my life without you as my wife". Video: Kathryn Hayes 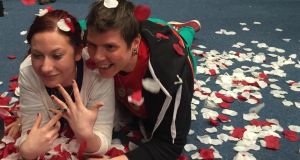 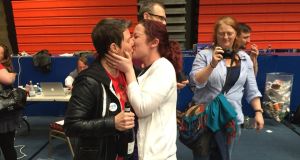 Limerick has said Yes to the marriage referendum and so did one local woman surprised with a marriage proposal, just seconds after the final tally result was confirmed,

As counting continued to confirm what the tallies have predicted, as Bruno Mars’s ‘Just the Way You Are’ blared out on a speaker at the count centre in University Sports Arena, when one lesbian woman got down on one knee to propose to her long-term girlfriend.

“Katie, we make a great team. I love you inside and out, head to toe. I don’t want to waste another minute of my life without you as my wife,” said Billie, who does not use a surname.

The 41-year-old got down on one knee and proposed to her 26-year-old partner Katie Stoica just seconds after tallies confirmed the referendum is set to be passed in both Limerick constituencies and nationally.

“I’m very overwhelmed right now and slightly mortified,” said Katie who was surrounded by friends and well-wishers including her mum Jacinta.

Born in Scotland but living in Limerick for the past 20 years, Billie said she has been planning the marriage proposal for the past few days.

“I’d been planning this with my friends, but only for the past four days. I didn’t want to ask if it was going to be a No result, so I came today not knowing if I was going to be able to say it or not.

“But I bought the ring and my friends helped and it looks like it is going to be a Yes so I thought I would ask while I could.”

Jacinta Stoica said: “I never thought this day would come I am very happy for both of them and for everybody else as well.”

Final tally results for the two Limerick constituencies showed 63 per cent voted Yes in Limerick city and 54 per cent in the county.