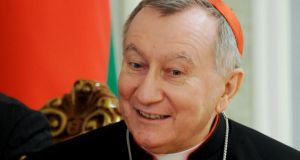 Vatican Secretary of State Cardinal Pietro Parolin called the result of the Irish referendum on same-sex marriage a “disaster for humanity”. Photograph: Getty

On the morning after Vatican Secretary of State, Cardinal Pietro Parolin, called the result of last weekend’s referendum a “disaster for humanity”, the Holy See was still standing by its man.

Senior Vatican spokesman, Father Federico Lombardi not only confirmed that Cardinal Parolin had used these words but he also indicated that the Vatican was sticking by them, word for word.

Pointing out that Cardinal Parolin had made his comment on the margins of a Vatican conference, Father Lombardi said that the Secretary of State had given his immediate reaction to the referendum result but that he had not had time or space to further elaborate his thoughts.

Asked by The Irish Times if the Secretary of State would like to outline those thoughts in greater detail to the Irish public, Father Lombardi suggested that this would not be opportune just at the moment, in as much as such an explanation might generate further polemics and misunderstanding.

Cardinal Parolin’s (60) hardline statement surprised Vatican observers, given that the Secretary of State, who was appointed by Pope Francis in August 2013, has tended to fly well below the polemics radar, leaving all the serious talking to his boss.

An accomplished diplomat, who worked for seven years in the Secretariat of State before being appointed Papal Nunzio to Venezuela in 2009, Cardinal Parolin has thus far always seemed to be a byword for tact and discretion.

There is little doubt, however, that his comments reflect the level of concern prompted in the Holy See by the result. Whilst Pope Francis himself might have chosen different words, he too obviously remains faithful to Catholic teaching that marriage can only be contracted by a man and woman.

Ironically, the Pope’s own catechesis (teaching) to pilgrims at his Wednesday public audience in St. Peter’s Square on Wednesday morning dealt with the issue of the importance of an engagement as a preparation for marriage.

Throughout a long analysis of engagement prior to marriage, the Pope consistently referred to marriage as a sacrament, a “lifelong commitment between a man and a woman”.

The Pope ended his teaching by urging the faithful to pray for the Holy Family of Nazareth, Jesus, Joseph and Mary. For all that Francis has in the past used compassionate and welcoming words in relation to gays, that welcome does not extend to an acceptance of same sex marriage, something which does not form part of “God’s plan for mankind”.

Both Cardinal Parolin and Cardinal Angelo Bagnasco, President of the Italian Bishops Conference (CEI), stressed, however, that the Archbishop of Dublin, Diarmuid Martin, had been correct to call the vote a “social revolution”:

“As such [a social revolution], the Church cannot not ask itself how it can improve its dialogue with Western culture...in this context, we believe in the family that is born out of the stable union between a man and a woman, a union potentially open to life [children] and one which constitutes an essential good for society and as such is not comparable to other forms of co-habitation...”, said Cardinal Bagnasco.

Bishop Nunzio Galantino, secretary general of CEI, also called for dialogue, saying: “The margin of the Yes victory in Ireland obliges us all to take on board that Europe, and not just Europe, is undergoing an accelerated process of secularisation which touches on everything, including relationships.

“Faced with this reality, our response can be neither a stubborn refusal based on fear and arrogance nor an uncritical acceptance based on fatalism and retreat.”