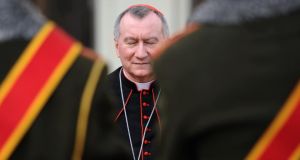 The Vatican secretary of state, Cardinal Pietro Parolin, has called the result of the Irish same-sex marriage equality referendum a “defeat for humanity”

The Vatican secretary of state, Cardinal Pietro Parolin, has called the result of the Irish same-sex marriage equality referendum a “defeat for humanity”.

Until Tuesday night, there had been no official Holy See reaction to the Yes vote in the referendum.

When that reaction finally came from Cardinal Parolin, the Vatican equivalent of prime minister, it was nothing if not hardline and outspoken:

“This result left me feeling very sad but as the Archbishop of Dublin [Diarmuid Martin] pointed out, the Church will have to take this reality on board in the sense of a renewed and strengthened evangelisation. I believe that we are talking here not just about a defeat for Christian principles but also about a defeat for humanity,” Cardinal Parolin told reporters on the margins of a Centesimus Annus conference in the Vatican.

Cardinal Parolin did not further explain the terms of this “defeat for humanity”, but his observations are a logical extension of Catholic doctrine, which teaches that the practise of homosexuality is a sin.

Coincidentally, reporters also questioned Cardinal Parolin about an ongoing row between France and the Holy See over the appointment of openly gay Laurent Stefanini as French ambassador to the Vatican.

It had been speculated that Mr Stefanini’s nomination by Francois Hollande’s government has not found favour with the Holy See, not so much because of his sexual orientation but rather because, in the past, he publicly supported same-sex marriage, which was introduced in France in 2013.

Nominated by the French government in early January, Mr Stefanini’s appointment has still not been ratified by the Vatican.

Asked about the matter, Cardinal Parolin would say only that “dialogue is still ongoing” between France and the Holy See.