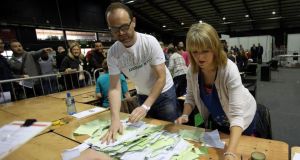 ‘In a referendum that asked young people to believe in themselves and their abilities, they did what was ingrained into them – and stayed quiet.’ Above, people sort votes at a count centre in Dublin following voting last week. Photograph: Paul Faith/Getty Images

Last week, youth across Ireland helped bring home a resounding victory which was a long time coming on marriage equality. Let’s not stop here. Let’s keep pushing until these same young people are truly recognised and can have an equal role at the decision-makers’ table.

On the outside, last weekend’s referendum result looked like a triumph for the younger generation – they were canvassing on the streets en masse and it was they who flocked home from all corners of the world to make their voices heard. But this was not entirely the case. On May 22nd, while young and old together voted for equality on one ballot paper, they unknowingly voted for inequality on the other.

The referendum on the lowering of the presidential age was also about equality. It was an opportunity to correct an injustice barring all young people under the age of 35 the constitutional right to engage in all levels of decision-making in our society. What voters actually voted for was the maintenance of a constitutional barring order against every single person in our country under the age of 35 for the office of presidency. In casting this vote, endorsing the view that no person under this age could possibly be suitable, voters played into the stereotyping of our young people, unwittingly contributing to inequality based on age.

How did this come about?

First, the outcome is a result of the lack of engagement with the public by the Government on the issues surrounding the referendum. This was a wasted opportunity to reframe the debate on how we see young people in Ireland today. There were no posters from Government parties, no engagement about why this referendum was so important, and indeed not a single canvasser pleading for a double Yes for equality.

Second, the timing was all wrong. It was overshadowed by the marriage equality vote, a life-changing, deeply personal issue whose time had come. Why was the lowering of the presidential candidacy age even put on the ballot on this occasion?

The thrust of the arguments from the No side seemed to stem from a belief that a young person would never be good enough for the office of the presidency and a dismissive attitude towards the notion of a young person even entertaining the idea.

This came across strongly at all stages in the run-up to the referendum, with the biased coverage predominantly favouring the No side. Even as someone talking about the issue, I personally encountered the effects of this patronising attitude towards youth on numerous occasions.The attitude was symptomatic of the pervasive belief that a youngish looking person should be dismissed and not taken seriously.

Even more importantly, the overwhelming result says even more about how young people view themselves. While young people want to be recognised and have their voices heard, when it comes down to it, they don’t trust that they are good enough. This is deeply ingrained into the psyche of the younger population and is a result of a decades-old mentality. In a referendum that asked young people to believe in themselves and their abilities, they did what was ingrained into them – and stayed quiet.

In taking lessons from last week, the mobilisation of young people on the marriage referendum clearly demonstrates how young people can effectively engage in politics and shows how deeply they care about the future of their country. It is important that young people recognise the impact that they had on the result of the marriage referendum. However, it is also equally important that they start to believe in themselves and in each other. This is about a generation understanding that the future is theirs to shape.

This is a time of political and cultural change for Ireland, where our nation seems to be getting its confidence back. However it is vital that our young people recognise that this is their moment and that the time for “waiting your turn” is over. Mairead Healy is chief executive of Future Voices Ireland, a registered charity which focuses on teenagers attending DEIS schools, particularly those with low levels progressing to third-level education