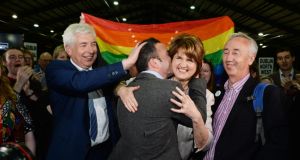 Success has many fathers, and all the political parties will be claiming a share of the credit for the overwhelming victory of the Yes side in the same-sex marriage referendum. The Labour Party will feel that it deserves a greater return than anybody else for pushing the referendum on to the political agenda and effectively forcing its coalition partners Fine Gael to run with it.

The holding of a referendum on same-sex marriage was part of the Labour Party’s manifesto at the election, but it was not included as a commitment in the programme for government.

Former tánaiste Eamon Gilmore initially got a chilly response from Fine Gael when he suggested that same-sex marriage was the civil rights issue of this generation. It was only after the constitutional convention recommended the change that the holding of a referendum in the lifetime of the Government became inevitable.

As the campaign reached its peak over the past 10 days or so, it became clear, and not only from opinion polls, that the Yes side was going to win. The enthusiasm of younger voters for the amendment was palpable.

The mood on the streets of Dublin was akin to that in the final stages of the Mary Robinson presidential election campaign in 1990. Change was in the air, and so it has transpired.

The question, though, is whether Labour will get much political credit for pushing the referendum on to the political agenda. Back in 1991 it did not seem that the party was going to benefit much from the Robinson victory, but ultimately it did manifest itself in the Spring tide of 1992.

This time around, it is going to be more difficult for the party to gain political capital from the overwhelming Yes victory, but even an increase of even a couple of percentage points in support could make a vital difference to its electoral prospects in less than a year’s time.

One nice touch on Saturday was the way Enda Kenny picked out Eamon Gilmore from the crowd in the yard of Dublin Castle and invited him to come up onto the stage with the leaders of the Yes campaign. It was no more than the former tánaiste’s due.

Although the precise benefit for Labour is hard to quantify, the paradox is that its initially reluctant coalition partner Fine Gael could end up with a greater benefit from the outcome. Even though he was distinctly uneasy in his early days in office about committing himself to proceeding with the marriage referendum at all, the Taoiseach did not shirk from taking a leading role in the campaign.

The fact that the campaign was being led by a 64-year-old man who happens to be a practising Catholic helped. That he had taken time to come around to the idea helped reassure middle-of-the-road voters that the constitutional change, unimaginable a decade ago, was acceptable.

Kenny has pulled off the difficult political feat of presenting himself and his party as progressive and forward-looking while still managing to hold on to its largely conservative base.

The final Irish Times Ipsos/MRBI poll of the campaign showed that the only age group intending to vote No was the over 65s, with 52 per cent of them opposed to the amendment. Yet the same poll also showed that Fine Gael’s strongest support comes from precisely that age cohort, with 44 per cent of them saying they would vote for the party if there was an election now, compared to an overall support figure of 28 per cent among the population as a whole.

By adopting a cause that is clearly so popular with younger voters, Kenny has positioned Fine Gael to add a progressive social image to the Government’s impressive record on the economic front.

Micheál Martin had probably an even more difficult political task to bring his party with him in support of the Yes side, given that its supporters were the most opposed of all to the change.

Fianna Fáil of old would probably have adopted a neutral stance and allowed individual TDs to campaign on whichever side they liked, hoping that the Government would suffer a defeat. By taking the progressive and popular side, Martin has at least given the party a chance of persuading younger voters to back the party in the election.

The victory of Bobby Aylward in the Carlow-Kilkenny byelection turned it into a really good day for Martin. It put a stop to mutterings about his leadership emanating mainly from the sitting TD for the same constituency John McGuinness. Carlow-Kilkenny delivered one of the best results for Fianna Fáil in last year’s local elections so a win was vital for Martin.

Now that he has it under his belt, he can argue convincingly that Fianna Fáil is capable of doing better in the general election than most of the opinion polls have indicated.

Sinn Féin and a variety of the left-wing groups also backed the Yes campaign, and they will also feel entitled to a share in the spoils of victory. Gerry Adams was the first political leader on to the stage at Dublin Castle on Saturday to reinforce the point. Given that Sinn Féin’s support base is weighted heavily towards younger voters, the party’s stance should help it to reinforce that loyalty.

The performance in Carlow-Kilkenny was not quite as good as opinion polls have been suggesting,m but the party will win a seat in the constituency in the general election if it can hold on to the 16 per cent share it won on Friday.

The striking feature of the referendum result was that the Yes campaign’s appeal had little to do with party politics. Young people were mobilised to come out and vote in substantial numbers by an issue that they generally regarded as being more important than politics. Getting young people nearly as enthused about the real choices facing the country in the forthcoming general election will be the challenge for all of the political parties.