Irish people have woken up in a kinder, more accepting Ireland 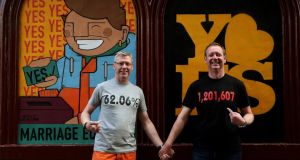 Paul Higgins (left) and Richard Lucey, who have been civil partners for four years and partners for 19 years, wear t-shirts displaying numbers for Yes voters on George’s Street in Dublin. Photograph: Brian Lawless/PA

Friday’s referendum changed more than the Irish Constitution, “it has reshaped forever the republic in which we live”, the Yes Equality Campaign has said.

Speaking at the organisation’s final press conference in Dublin on Sunday, organised to thank the Irish public for voting Yes, Brian Sheehan, co-director of the campaign, said people woke up on Sunday in a kinder, more gentle, more accepting Ireland.

He said Irish people have given a new sense of belonging to their lesbian and gay family members, friends and neighbours.

The campaign was set up by the Gay and Lesbian Equality Network (Glen), the Irish Council for Civil Liberties (ICCL) and Marriage Equality to canvas for a yes vote in last Friday’s referendum to allow same-sex marriage.

Some 62 per cent of voters accepted the constitutional amendment.

Gráinne Healy, co-director of the campaign, said a question was asked, that question was answered resoundingly, and all of us are the better for that.

She said the campaign had been transformative and had given LGBT people in Ireland permission to “love ourselves, to come out more comfortably and completely, some for the very first time”.

“While we know much remains to be done, today is a turning point, one that should allow all lesbian and gay people in Ireland to fulfil their true potential in family, in love and in life,” she said.

Also speaking at the press conference, Mark Kelly, director of ICCL, said he was looking forward to the swift enactment of same sex marriage legislation.

He said what will be the Marriage Act 2015 already existed as a general scheme and has to be completed. The Department of Justice had reassured him they see it as a very simple thing, he said.

“It will remove discriminatory references to man woman marriage from some legislation,” he said.

He also said there was some unfinished business in terms of equality, including legislation that allows for legalised discrimination against LGBT teachers working in schools controlled by religious authorities.

Ailbhe Smyth, from Marriage Equality, said the organisation was set up 10 years ago to achieve marriage equality.

“I really do believe this campaign came at the right time; it was very clear from the generous and warm response on Friday that the Irish people were ready and willing and open for this major campaign,” she said.

“For young LGBT people growing up in Ireland the future looks so much more equal, so much more positive and open for them all.”

Kieran Rose, co-chair of Glen, said the vote was a phenomenal expression of empathy and generosity.

The size of the vote was fantastic and it wasn’t just the Dublin liberal constituencies that won it, it was throughout the country, he said. It was also fantastic that there was a huge turnout and yes vote in working class areas.

“By being the first country in the world to grant by referendum the right to marry, it sends a fantastic beacon of hope to countries that are now what we were like in the 1980s and 1970s,” he said.

Separately, Evelyne Paradis, executive director of Ilga, the international lesbian, gay, bisexual, trans and intersex association, told The Irish Times the “tremendous genuine change in the hearts and minds, is an inspiration for activists and those fighting for equality in many, many other countries”.

The group, which works with LGBT groups across Europe, held a meeting in Dublin at the weekend to coincide with the vote.

“Already there is a long list of requests coming from different groups across Europe to get the Yes Equality campaigners in their countries to find out how they managed this tremendous success,” Ms Paradis said.