Referendum body to clarify position on surrogacy and adoption

Government has plans to deal with area of surrogacy, commission chairman says 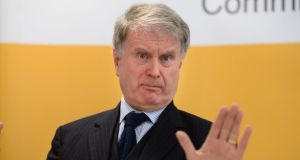 The Referendum Commission is to issue a statement within 48 hours further clarifying issues surrounding surrogacy and adoption rights for same-sex couples.

Mr Justice Kevin Cross has been contacted by members of the public to outline the position on the two key issues ahead of the referendum on May 22nd. It is understood the chair of the commission will detail the situation in a letter to those who corresponded with him.

The statement, which is seen to be a rare and unusual move, will also be made public on the commission’s website and will be issued through the media.

Mr Justice Cross said the Government had announced plans to deal with the area of surrogacy and would proceed with that “no matter what the result of the referendum”.

He also moved to clarify the issue surrounding adoption rights for same-sex couples. He said nobody had an automatic right to adopt a child and a licence was granted with the best interests of the child in mind.

Mr Justice Cross quoted chair of the Adoption Authority of Ireland Geoffrey Shannon, who said the adoption process would not be affected.

Yes Equality welcomed the clarity provided by Mr Justice Cross, which they say would harm the argument of the No side. Spokeswoman Gráinne Healy said: “The No side has consistently sought to muddy the waters by raising unfounded fears surrounding adoption, surrogacy and family life.”

Mothers and Fathers Matter will today hold a press conference where a number of questions will be put publicly to the commission. The group also intends to unveil new posters as polling day gets nearer.