Stressing their own experiences gets positive response for Yes side

Harry McGee visits Yes Equality campaign headquarters in Dublin and joins canvassers as they knock on doors in Mullingar, hoping their personal stories will galvanize voters and even change minds just ahead of polling day. Video: Kathleen Harris 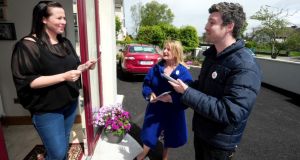 By coincidence, just as the same-sex marriage referendum campaign was getting under way, a remarkable podcast appeared on This American Life, a celebrated American radio documentary platform.

It was entitled The Incredible Rarity of Changing Your Mind and challenged the conventional wisdom that people’s strong views are intractable on fundamental issues such as abortion, the Iraq War and gay marriage.

The documentary explored instances where people had done the unexpected on their strong views, moving to the other side. The story began when same-sex marriage laws in California were revoked in 2008 by a narrow (but shock) defeat in a public plebiscite known as Proposition 8.

Until then, political campaigns had operated on a strategy of mobilising your base (your supporters) and targeting the tiny sliver of the population identified as undecided. But in a radical departure after 2008, some same-sex marriage campaigners tried to engage with opponents of gay marriage to see if any could be persuaded to change their minds.

There was a lot of trial and error but the eventual results were trend-bucking. They found that arguments at the rational level about rights and equality just did not work. But when gay people (essentially those with an emotional investment in the issue) listened with respect to the life experiences of the people they canvassed and then shared their own personal stories, it led to an extraordinary breakthrough.

“People make their decision about how they vote [on this issue] at a gut level and a visceral level and at an emotional level,” presenter Ira Glass commented. It seems those one-on-one encounters opened eyes, made the debate personal and human rather than abstract.

A follow-up study by UCLA showed that not only did people change their minds, they stayed the course over the long term and even persuaded others to do the same. It was a game-changer with a measurable increase in support among that cohort.

The This American Life podcast has been widely distributed by the Yes Equality campaign to its supporters and branches throughout Ireland. It has also provided a template for its approach to the campaign for the May 22nd referendum.

The first obvious observation about this Yes group is that it has a hugely visible presence and has mobilised many thousands of volunteers. It has postered the entire State with its colour-splashed posters and has distributed half a million Yes and Tá badges, which have become like a Fáinne Nua (but very on trend) for all who support it.

Visibility is one thing. Sure, part of the Yes campaign is mobilising its base which means among other things “get out the vote”and ensure younger supporters register. Beyond that, though, the campaign has very deliberately reached out to another group which would not be classed as natural supporters – a more conservative older and settled cohort usually shorthanded as middle Ireland.

Before examining how that has been done, it is worthwhile looking at how it is organised. It brings together three groups which have campaigned on this issue for a generation (the Gay and Lesbian Equality Network, Marriage Equality and the Irish Council for Civil Liberties) and is co-chaired by Gráinne Healy and Brian Sheehan, both long-term activists.

It has about 25 volunteers working in a featureless headquarters in Dublin city centre. Within weeks of starting, branches were mushrooming spontaneously throughout the State. “We had groups coming to us saying we live in Ballinasloe or Tuam or Finglas,” said Healy. There are now 58 branches around the country and thousands of volunteers.

Funding was difficult initially but is now flowing in. The group will have raised €250,000, with the average donation being €75. The fund-raising activities have ranged from sponsored dog walks to tea evenings (Equali-Tea) but the most lucrative has been merchandise – badges, posters T-shirts and stickers.

It is the thrust and manner of its message that is most surprising. “We want to get away from ding-dong debates that people have on these issues,” says Healy. “We want to engage in a conversation with people on why they are voting yes or no.”

Specifically, the group has been engaged in what political pundits like Whelan term a ground war, targeted at those who might instinctively vote No but might be persuaded to vote Yes. That has meant bringing the campaign to every corner of the State, to every age group, to every urban and rural dweller.

The campaign has used different methods to achieve this. Older parents who have an adult gay child have given first-person accounts of how it changed their outlook on life. They are powerful emotional tools and, like Frank O’Connor short stories, contain that epiphany moment where nothing will ever be the same again.

The campaign has also been emphatically backed by groups and individuals respected by middle Ireland – Mary McAleese, GAA figures such as Eamon McGee and Babs Keating, and Sr Stanislaus Kelly. That does not mean there are not questions and some difficult ones. Healy says the biggest question comes from Catholics who say the church does not approve. “We have been saying very clearly that it is a civil marriage and will not affect church marriage,” she says.

Surrogacy has also come up as an issue. Healy sets out the campaign’s response. “It really is a red herring. It is only 17 words that people are being asked to vote on in the referendum.”

There has been a highly successful Yes Equality bus that will have zipped through 66 stops in all 26 counties during the 27 days of the campaign, generating a lot of local coverage, helping to break down the perception, as Healy puts it, that it’s a Dublin 4 issue.

It is the interaction with this more traditional cohort that is intriguing. There has been a perception that the referendum would throw up the urban-rural, younger-older divide seen in previous campaigns.

“To be honest, that has not been the experience on the doorsteps,” says Séamus Carey from Athlone, who is organising a canvass in the Lakepoint estate in Mullingar on a cool May evening. “It’s easy for the media to paint a picture of a Dublin liberal elite campaigning for marriage equality and the rest of the country catching up.”

A big crowd is panning across the estate, mostly young. There is a mix of gay people, family members and supporters. Few are political, most have not canvassed before. The response is mixed, mostly Yes but some polite – and some definite Nos. What is noticeable is the respectful civilised manner of the canvass, seeking engagement, keeping it personal as much as possible.

“One of the main things I have been telling people is just be personable and tell your story,” says Carey. “A lot of people being canvassed have not met gay people before. It is a person standing on the doorstep saying: ‘I live up the road and I’m gay and this is about me, about real local people with the same hopes and aspirations as you.’

“Making that personal connection can really change people’s opinions. It’s no longer an abstract question about human rights. There is nothing more powerful about that personal story and the reason why they are seeking a Yes vote.”

Paula Murray, her husband Freddy, a farmer, and one of their two children, son Niall, are out canvassing too. Her sister is a lesbian who is in civil partnership. “They have two beautiful children. Their family unit is a shared home. Our one is a family home. We think that is unacceptable and unequal,” they say. They have shared that personal story on the doorstep with very positive feedback.

So too have local Mullingar campaigners Shay Barkey and Richie Mulderry. Barkey says that at one door a man said he would vote No because he did not want to see two men or women kissing in a restaurant.

“We talked it through and he still said No. When we were leaving he made a point of following us in his car. He said ‘I think you were really nice and I have read the leaflet and I am going to vote Yes’. It was nice to know we had changed his mind.”

Sounds like a case study from That American Life.