No: Why we should vote against lowering the age of candidates eligible to become President

‘Any candidate aged between 21 and 35 would be more likely than others to be a creature of a political party, chosen and funded as a gimmick to appeal to young people’ 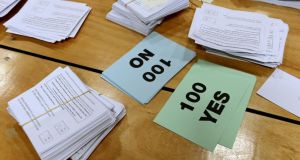 ‘The proposal is also rash. The president represents Ireland, and Irish voters have shown that they pick presidents with some care. Who wants a head of state who lacks weight when it comes to meeting those of China or the US, or the Queen of England?’ Above, ballot papers in The Citywest Count Centre during the Fiscal Stability referendum count. Photograph: David Sleator/The Irish Times

Patronising, rash, pointless and a waste of money. The proposal to lower the age at which citizens may become President of Ireland deserves to be rejected.

Young people need jobs, real wages, rent control, mortgages, proper health care and pensions. Throwing them the bone of being able to stand for president is a sad sop. It is especially insulting to those aged 18 to 21, now arbitrarily singled out as somehow inferior to all other voters.

Voters aged 21 to 35 have more on their minds than running for president. And they are just as capable as older voters of seeing the benefit in having a president with experience and standing.

If this random referendum is meant to flatter their vanity then they are fools to vote for it. They should vote No, if only to express their frustration at their current economic conditions.

Any candidate aged between 21 and 35 would be more likely than others to be a creature of a political party, chosen and funded as a gimmick to appeal to young people — and to patronise older voters by suggesting they could get “with it” by voting someone in their 20s into Áras an Uachtaráin.

A younger president will lack the experience that helps to handle constitutional crises, to face down heavy pressure like that exerted in the past on Ireland’s first citizen by Fine Gael minister Paddy Donegan or Fianna Fáil’s Charles Haughey. Or helps to know how best, in that isolated office, to respond when assailed by protesters as happened to President Higgins recently.

The proposal is also rash. The president represents Ireland, and Irish voters have shown that they pick presidents with some care. Who wants a head of state who lacks weight when it comes to meeting those of China or the US, or the Queen of England?

If the Government really believes in young talent at the top then why is the average age of Cabinet ministers 57? Not one is even below the age at which citizens can currently become president.

The Irish Constitution is the cornerstone of this battered State. Citizens have jealously guarded it, rejecting efforts to change the voting system, abolish Seanad Éireann or otherwise play with its basic provisions. Irish voters on the Nice Treaty showed a proper reluctance to be taken for granted.

When changes are made to the Constitution without sufficient care, it is brought into disrepute. This can be seen clearly by the consequences of abortion amendments that have ended up pleasing nobody.

There is no big public demand for a vote on the age of the president. This proposal reflects a loss of focus by politicians. By voting No, citizens make the point that they will not be trifled with, and that more serious political reforms are overdue.

If the Government wants meaningful constitutional reform it could, for example, propose changes in the bail law. Or ensure that invoking property rights cannot block us getting to the bottom of the banking crisis by tracking the money trail; or cannot prevent us nationalising national school properties if necessary.

The Government did not even take this opportunity to propose a slate of minor changes advocated by its own Convention on the Constitution, which was lately funded by taxpayers and toiled for two years.

Proposals of the Convention on the Constitution included strengthening economic and social rights, electing the Ceann Comhairle by secret ballot (not likely!), reducing the voting age and giving citizens overseas a vote.

The referendum is an insult to young people moving abroad, either on contract or more permanently. Emigrants were meant to get a say in presidential elections, as happens in other states. But that prospect is now off the table. It would be more meaningful than this pat on the head.

Instead we are being asked merely to reduce the age at which one is eligible to become president, and this at a time when most people want politicians to fry bigger fish. Why waste money on such a referendum?

The proposal did not even figure in 2011 in the Programme for Government, when Fine Gael and Labour trumpeted “comprehensive constitutional reform” and listed envisaged reforms that are now buried.

There are few voters in Ireland who ever cared about this question. A No result will send a message to Oireachtas Éireann that politicians ought not to toy with the Constitution or patronise the electorate.