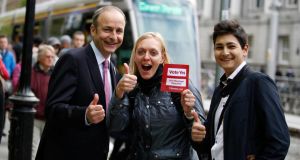 Fianna Fáil leader Micheal Martin has welcomed the strong showing of the Yes campaign in the marriage equality referendum and said it reflected the fundamental decency of Irish people.

Speaking in Cork, where his own constituency of Cork South Central returned a near two to one majority for the Yes campaign, Mr Martin paid tribute to civil society groups on the Yes side.

“I am absolutely delighted – it’s a tremendous triumph for Yes Equality in terms of very well run campaign which captured the imagination of the Irish people inter-generationally.

“People of ages came out to vote . . . there was also a very significant mobilisation of young people to a degree that I have not seen before in either referenda or indeed general elections campaigns.”

Mr Martin said that Fianna Fáil had witnessed this surge of interest among young people with up to 150 people joining their campaign in Cork who had never previously canvassed before.

Mr Martin said the mobilisation of 22 and 23 year olds who have never vote before could have an impact on politics going forward but today was a day to reflect on the success of the Yes campaign.

“I think this vote reflects at the heart of Irish society there is a fundamental core of decency and tolerance and a sense of bringing people in from the cold and furthering inclusion,” he said.

“Notwithstanding the numbers of newcomers who had no previous experience of knocking on doors coming out to canvass with us, this referendum did transcend party politics by a country mile

“And I think it’s very interesting and very significant that a cause like this captured the imagination and interest of people who hithertofore would not have engaged in the electoral process.”

Mr Martin also paid tribute to individuals who came out to tell their own experience of being gay or lesbian or having a son or daughter who was homosexual in an Ireland that was not always tolerant.

“I agree with Simon Coveney when he said that this referendum was not won by political parties - I went along to Yes Equality meeting in Cork last Sunday and it was a compelling meeting.

“ I made a contribution but I listened for about two hours and I heard people give their personal testimonies and that sense of alienation and ostracisation here in the own country.

“I heard 50 year old gays and 60 year gays on what this referendum meant to them, men and women who had to leave this country because of that sense of alienation, ostricisation and bullying.

“And I think a lot of people responded to that in the sense that this vote was about lifting that taboo, that stigmatisation and that core sense of decency and tolerance kicked in and triumphed.”

“I think people like Ursula Halligan and the heart rending statement she issued deserve a lot of credit for the courage they showed in coming out and saying what life was like for them.

“I think that was significant and I think Mary McAleese and her impassioned plea three or four days ago struck a chord, being a woman, rearing a gay child and from a Catholic perspective too.”

“And there were many parents, many grandparents of gay children saying we were not going to let them down – we are going to support them, this is our chance to do that and they did.”

Mr Martin said he never held with the view that Irish society is innately conservative but the likely referendum results does show Ireland internationally as being a tolerant society and country.

“I actually think Irish people are a tolerant people overall - my late mother for example was a very strong Catholic but she was never judgemental and had that tolerant streak within her.

“There are strands within Catholicism which are liberal - there were many priests out there for example who were quite nuanced in their approach to this referendum.

“Irish society is changing and evolving - I think it is significant Ireland is the first country in the world to approve gay marriage in terms of a popular mandate which is probably the best way to do it.

“I know there are people who criticise the fact that we have so many referenda to change our constitution but I think the more you continue to engage with people on these issues, the better.”