Marriage vote turnout in top five of all referendums 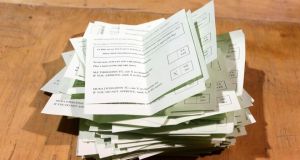 The highest turnout in any referendum was for the 1972 question on joining the EEC, when 70.88 per cent of the electorate cast their ballot

The surge of young voters in the marriage referendum brought the turnout into the top five of all referendums since the adoption of the Constitution in 1937.

Divorce, abortion, joining the EEC (forerunner to the EU) and changing from a proportional representation (PR) electoral system to first past the post, were the only referendums with a higher turnout.

The highest turnout in any referendum was for the 1972 question on joining the EEC (European Economic Community) when 70.88 per cent of the electorate cast their ballot.

The three abortion referendums held on the same day in 1992 on information, the right to travel and risk to a mother’s life had a 68.13 per cent turnout.

A referendum in which the Fianna Fáil government of the day proposed changing the electoral system from PR and the single transferable vote to first past the post single seat constituencies attracted 65.77 per cent of the electorate in 1968 and was defeated.

The first divorce vote in 1986, which was defeated, had a turnout of 60.84 per cent, just 0.32 per cent more than for the marriage referendum when 60.52 per cent of the electorate cast their ballot.

That 60.52 per cent turnout was a dramatic increase on the previous two referendums when less than 40 per cent of voters went to a polling station.

Just 39.17 per cent of the electorate took to the polls for the referendum on the abolition of the Seanad in 2013 and 39.38 per cent voted for the establishment of a Court of Civil Appeal on the same day.

The referendum on children’s rights had an even lower turnout at 33.49 per cent in 2012.

But the lowest turnout was 28.6 per cent in 1979 in votes on adoption and university representation in the Seanad. The two referendums were on the same day.

Voter turnout dropped significantly in single year between the 2011 referendums on judges’ remuneration (55.96 per cent) and Oireachtas inquiries (55.94 per cent) and the 2012 children’s rights referendum (33.49 per cent), a reduction of almost 22.5 per cent.

The 1992 abortion referendums had a high turnout of 68.2 per cent as did the divorce referendum in 1995 when 62.15 per cent of the electorate voted.

Just 34.79 per cent turned out for the first Nice Treaty referendum in 2001, which increased to 49.47 per cent for the second vote on that treaty the following year.

Voter interest in treaty referendums continued to rise for the first Lisbon treaty vote in 2008 when 53.13 per cent of the electorate turned out, rising further to 59 per cent for Lisbon 2 in 2009.