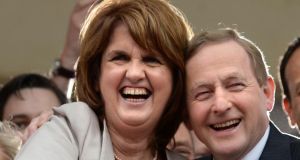 Tánaiste Joan Burton and Taoiseach Enda Kenny in the courtyard at Dublin Castle for the results of the referendum on marriage equality. Photograph: Dara Mac Dónaill/The Irish Times

Voters passed the same-sex marriage referendum by 62 per cent to 38 per cent, with all but one of the State’s 43 constituencies voting Yes. At just more than 60 per cent, the turnout was higher than usual referendums, but still below the average number of votes cast at a general election.The final result saw 1,201,607 votes to allow same-sex marriage, with 734,300 against, giving the Yes side victory with a margin of 62.07 per cent to 37.93 per cent.

Only Roscommon-South Leitrim voted No, by a margin of 51 per cent to 49 per cent, while the highest Yes vote was in Dublin South East, 75 per cent to 25 per cent. The lowest Yes vote in the capital was Dublin North East, at 67 per cent-33 per cent.

Even areas which Yes campaigners feared might vote No voted in favour, although some by very narrow margins. Both Donegal constituencies voted Yes, although the margin in Donegal South West was just 0.05 per cent, or 33 votes. The final Yes tally in the constituency was 15,907 to 15,874 for No. Cavan-Monaghan was also tight, with 51 per cent for and 49 per cent against.

Welcoming the results at a press conference in Dublin Castle following the official declaration, Taoiseach Enda Kenny said the strong Yes vote sent a “sound of pioneering leadership” from Ireland to the rest of the world.

Mr Kenny said the signal sent out on gay rights from Ireland – the first country to introduce same-sex marriage by way of popular vote – would be “heard loudly across the living world”. He said many gay people and their families waited on the results “almost like a vigil at the end of a long journey”.

“That Yes is heard loudly across the living world as a sound of pioneering leadership from our people, and hopefully it will also be a sound across the generations of gay men and women born, as we say, before our time who took their secrets when they moved on.”

Mr Kenny asked the thousands of young people who voted for the first time to maintain their interest in the political sphere “because your country needs that participation in our democratic process”.

Tánaiste Joan Burton said Ireland, known as a nation of storytellers, has “told quite some story” with its Yes vote, which she described as a “magical, moving moment”.

“Our people have spoken powerfully and profoundly. Together, we’ve chosen to make progress. We’ve chosen to create a more compassionate and egalitarian Constitution. We’ve said Yes to equality and Yes to love.” She said she was “immensely proud” of the role Labour “played in securing this referendum and helping to win it”.