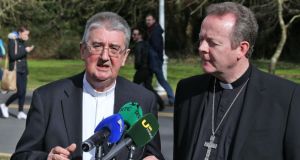 ‘The most significant No campaign was run by the church, and in particular by the bishops who many felt might have kept their power dry. However archbishop Eamon Martin (right) issued a pastoral letter three weeks into the campaign, and the Dublin archbishop Diarmuid Martin (left) also entered the fray.’ Photograph: Colin Keegan, Collins Dublin

This marriage equality campaign leading to a resounding Yes vote with a high turnout was extraordinary, full of juxtapositions and watched carefully by campaigning groups and political parties all over the world.

On the Yes side, we had an Obama 2008-style campaign mixing traditional ground campaign tactics with crowdfunding and a highly motivated online following. On the No side, we had a traditional campaign played out over the airways and in the papers with paid-for online advertising.

The Yes message stressed positivity, equality and personal stories, with multiple heavyweight participants. The No message was negative, about sowing doubts with few heavyweight participants. As a letter here last week pointed out, the playbook remains the same as in the highly contested divorce referendums in the 1980s and 1990s. Fudge the issue, beware the consequences.

In terms of the traditional campaign, both sides postered heavily in streets and neighbourhoods, but there were differences both in the message and in impact. The Yes side started with some 5,000 posters mostly in the main urban areas. The No side postered these areas too but also had thousands of posters in large town and villages across the country.

The Yes posters concentrated on a simple appeal to equality. The No posters, on the other hand, engaged in negative campaign tactics, using messages about children that had been found to work in Croatia and Slovenia. In fact it is possible these posters and messages had a negative impact leading to thousands of donations to Yes Equality and a building of resentment in many communities who felt their families were being disrespected.

Broadcasting rules ensured the so-called air war was balanced, often through the use of a clock despite this not being required by the Broadcasting Authority of Ireland. Anecdotally, it also meant the system could be gamed by changing line-ups at the last minute and refusing to debate. David Quinn of the Iona Institute, for example, never publicly debated same-sex marriage with Amnesty’s Colm O’Gorman.

The other interesting element was the extent of central messaging control. The Yes campaign was an amalgamation of a wide range of groups under the Yes Equality banner including Marriage Equality, Glen, the Irish Council of Civil Liberties and Amnesty International. After an inauspicious start the joint set-up proved a success and the fact these groups managed to co-ordinate some 60 campaigning groups in every constituency is testament to its success. Groups of 40 and 50 new campaigners young and old, gay and straight, came together night after night. The central group met every Wednesday to decide on central messaging but in reality it never really changed: keep positive: ask for people’s help.

The most significant No campaign was run by the church, and in particular by the bishops who many felt might have kept their power dry. However archbishop Eamon Martin issued a pastoral letter three weeks into the campaign, and Dublin archbishop Diarmuid Martin also entered the fray.

At the same time, the Iona Institute attempted another often effective tactic, known as wedge politics, which involves finding an issue that can be exploited to prise off your opponent’s traditional supporters. That issue, of children, adoption and surrogacy did not take off to the extent expected, with many people perhaps seeing it as a diversionary red herring.

The Marriage Equality Get out the Vote campaign was a masterclass in organisation. By Monday last, Yes Equality teams had canvassed every street in every urban area. That left the bus and the teams to return to areas and ask people again to turn out. Others took local action such as Brendan Cairney a novice optical activist who painted his van in rainbow colours and drove strategically around north Dublin on Friday, with a particularly emotive stop at Fairview Park.

The result is tens of thousands of newly mobilised voters. The parties are all eyeing this newly engaged electorate with interest as are other campaigns. The Labour Party, given its centrality in bringing the referendum about, may hope for increased support. In 1990, the large vote for Mary Robinson in the presidential election arguably found its way to Labour and the Spring Tide in 1992. What will happen this time is still open to question given the effects of austerity politics.

Overall this was a victory for a well-planned, positive, personal campaign over the old-style negative playbook. Where we go from here will be fascinating to watch.