Archive Video: The large crowds react joyously at confirmation of a 'Yes' vote in Dublin Castle. Large crowds were gathering all day for the result in the same-sex referendum. 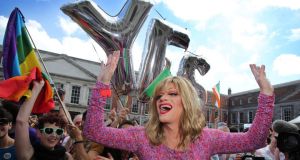 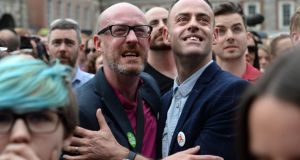 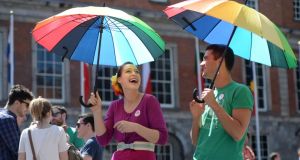 Breda Hegarty, Bantry, West Cork and Raymond Braun, New York, joined supporters gather in the court yard at Dublin Castle, the Central Results Centre, for the results on Referendums on Marriage Equality and Age of Eligibility for Eelction to the office of President. Photograph: Dara Mac Dónaill/The Irish Times 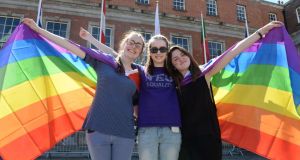 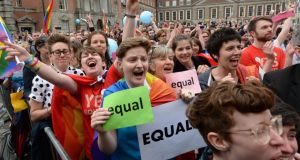 Crowds react in the courtyard of Dublin Castle on hearing the results of the same-sex marriage referendum. Photograph: Dara Mac Dónaill/The Irish Times.

Ireland has officially passed the same-sex marriage referendum with 1.2 million people voting in its favour. The result was confirmed just before 7pm on Saturday although the result was clear from very early in the count. The Yes vote prevailed by 62 to 38 per cent with a large 60.5 per cent turnout.

Roscommon-South Leitrim was the only county to reject same-sex marriage. The No vote there finished with 51.4 per cent.

Donegal, against some expectations, approved the amendment to the Constitution by a small margin. Donegal South West was on a razor edge with 50.1 per cent voting Yes, representing a margin of just 33 votes.

A referendum presented simultaneously on reducing the permissible age for presidential candidates was roundly defeated.

The Yes vote in Dublin in the same-sex marriage referendum was particularly pronounced.

As the result emerged on Saturday afternoon thousands of people gathered in the courtyard of Dublin Castle amid scenes of widespread jubilation.

Senior politicians welcomed the result, with Minister for Health Leo Varadkar saying the overwhelming Yes vote makes Ireland a “beacon of light” for the rest of the world in terms of liberty and equality.

“It’s a historical day for Ireland,” he told RTÉ, a “social revolution”, adding that had any constituencies voted No, it would only have been a handful. In the end there was just one. Mr Varadkar revealed publically during the referendum campaign that he was gay.

Archbishop of Dublin Diarmuid Martin said it was now time to focus on other myriad inequalities in Irish society.

Ireland did it! The 1st country to legalize marriage equality by popular vote, but they won't be the last! What an incredible accomplishment

“I have the strong belief - there is a strong belief in the church - about the nature of marriage and the family,” he said, after the result was beyond dispute.

“I would like to have seen that the rights of gay and lesbian men and women could have been respected without changing the definition of marriage. That hasn’t happened, but that is the world we live in today.”

The eyes of the world have been trained on Ireland with the story featuring prominently in international media throughout the weekend.

He particularly noted how young people had travelled around the country to “to put a single mark” on a ballot paper, demonstrating the value of the issue at hand.

Paul Moran of Millward Brown told RTÉ voter turnout had proved vital and that youth had driven the result, if not entirely deciding it. Social media has played a central role, he said.

No campaigners congratulated the Yes side. Prominent No campaigner and director of the Iona Institute David Quinn seemed to concede the vote shortly after counting began when he tweeted: “Congratulations to the Yes site. Well done.”

The Iona Institute issued a statement congratulating the Yes side “on their win” which they described as “a handsome victory”.

“We hope the Government will address the concerns voters on the No side have about the implications for freedom of religion and freedom of conscience,” it concluded.

No campaigner Senator Ronan Mullen said he was not surprised by the seemingly “very substantial majority” in the Yes vote but remains concerned about changes to the Constitution and its negative impacts.

Nobody in the No campaign thought it was going to be easy, he said.

“We are operating in a political time and place in Irish culture”, up against a very skilled Yes campaign which had the support of all political parties.

Senator Fidelma Healy Eames, who also campaigned for a No vote, said the referendum “for me was never anti-gay”. She said she had switched her vote from Yes to No simply because of her concerns around constitutional change and its effect on a child’s birthright.

The No advocacy group Mothers and Fathers Matter expressed “warm congratulations” to the Yes side but said that one in three Irish people - the vote ratio - were not represented by the political establishment.

Yes campaigner and Fianna Fáil Senator Averil Power said gay campaigners who told their stories on the doorsteps of voters had “helped to change Ireland for all of us”, not just the gay community.

She said she had seen many of them reduced to tears by the experience they had during the campaign. For them, it was often “an incredibly difficult thing to do”.

Senator David Norris, who fought from the 1970s to 1993 to have homosexuality decriminalised, welcomed the result. “I believe that by the end of today gay people will be equal in this country. I think it’s wonderful,” he said.

Minister for Children James Reilly said while the same-sex marriage referendum yes vote is strong in Dublin, it is also strong around the country. He says a lot of voters have been thinking about their grandchildren and giving them the same opportunities in life, should they be gay.

As with the last referendum, media facilities were made available at Dublin Castle, and a large international contingent was in attendance.