Head to head: A son with two mothers argues in favour of same sex marriage

‘Occasionally, I am asked if my own childhood was impacted by not knowing my paternal father and, honestly, I cannot think of a single way’ 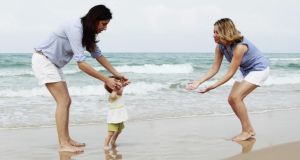 ‘We have a chance to do something truly wonderful – not just for grown men and women of the LGBT community in Ireland, but for our future children.’ Photograph: Getty Images

My name is Finn Murray, a man with two mothers.

I sit here now, 30 years old and with two children of my own, after a recent trip to Disneyland Paris with them and my biological mother. A trip paid for by my mother’s partner as a birthday present for myself, and 50th birthday present for my mother – a kind and wonderful gesture, that had all four of us excited – perhaps me most of all!

Now I’m sitting at home, wondering if my own childhood was any different to that of my own children, and I truly cannot help but think that it’s all basically the same. I went on the same holidays as a child – sight-seeing, visiting water parks and spending time with my parents, like all the other kids I could see. I was taught the same values: to be kind, to be honest, not to fight and not to discriminate.

I grew up in Cork city from the age of eight. All of my school friends knew that my parents were two women and honestly, no-one really cared about that.

Was I ever picked on? Well yes, I was. I was picked on because I had an English accent, because I was a bit of a know-it-all, but never really because of my parents.

Some kids in my schools were bullied because they were ginger, or overweight, or for other silly reasons. A few kids in my class were raised by single mothers, single fathers or grandparents, among the many children raised by the “conventional” mother and father. Yet each child was the same and, while we can say that a child raised by an “unconventional” family may have a harder life, do we solve this problem by openly dismissing a child’s parents as inferior? Of course not.

Occasionally, I am asked if my own childhood was impacted by not knowing my paternal father and, honestly, I cannot think of a single way. Maybe when puberty kicked in there were a few awkward conversations, but I had my older cousin, my grandfather and my uncles to approach for those questions. Frankly my parents were more than happy to speak about it, and it was usually very funny, as you can imagine.

Shaving was a doddle and not really a hard thing to learn, but I managed to solve that little problem by always keeping a beard because I look 12 years old without it.

I’m not going to make a bold claim that no child will ever be upset by not knowing one of their biological parents, because some will. What I will say is that the gender of our parents means very little. Thousands of people across Ireland have been raised in single-parent homes, by separated or divorced parents, or through adoption or surrogacy by heterosexual couples, and by LGBT parents and a variety of other situations. I can’t help but feel this claim – that a child must have a mother and a father in order to be “normal” or “ideal” – is insulting to all parents in Ireland. A child’s ideal home is a home where the child is cared for, raised to know right from wrong, educated, played with and most importantly, loved.

Some readers out there aren’t happy with the upcoming referendum and the idea of marriage equality for some reasons, and that’s okay.

Some believe this referendum is going to suddenly cause a tidal wave of children raised by gay men and women, when in fact, this is already happening in Ireland, and it’s been going on for at least 30 years now! And we’re just the same as you.

This referendum is purely about whether the State should recognise the legal right for two people, regardless of gender, to be recognised as a couple, with the same legal rights that my future wife and I will have.

We have a chance to do something truly wonderful – not just for grown men and women of the LGBT community in Ireland, but for our future children, grandchildren, nieces and nephews. Because many of them will be gay, and I don’t want to look them in the eye when they ask why they can’t get married and say, “Because you’re different.”