Gay parish priest thanks congregation for accepting him 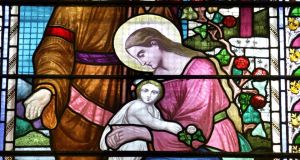 Fr Dolan, the parish priest at the Church of St Nicholas of Myra in Francis Street, Dublin, told his congregation on Saturday evening that the Irish public had heard the “pleas of desperation of a minority” from the LGBT community and had made the LGBT cause “as important as their own”.

He said he was proud to be Irish and thanked his parishioners for accepting him as a gay man. Fr Dolan first came out as a gay man in January when he urged his congregation to vote Yes in the marriage equality referendum.

Fr Dolan took issue with the Archbishop of Dublin Dr Diarmuid Martin’s comments that the Catholic Church needed a new language when dealing with young people.

“With great respect, it is not a new language that we need but a new way of being and living,” he said.

He stated that the early Christian Church was “not known for the eloquence of its language, but for one thing and one thing only - ‘see how those people love each other’.

“Jesus was always reaching out to people on the edges of society. His whole way of being was to draw people in and to include them rather than exclude them.

“God’s spirit was given to us so we can be a power and force in the world. The opportunity for new beginnings begin every day of our lives. It comes every time we draw breath. We have a choice - we can build bridges for people or we can build stone walls.

“We have to become people of love, joy, patience, kindness, goodness, faithfulness and self-control.”

Fr Dolan was speaking at a memorial Mass to remember the men of the Royal Dublin Fusiliers who died at Mouse Trap Farm in Ypres, Belgium, 100 years ago this weekend.

The Last Post was sounded at the end of the Mass and the Fusiliers’ standard lowered.

Mr Dolan remembered a mother from Bride Street in the parish whose three sons Patrick, John and Peter McDonald died defending Mouse Trap Farm in April and May 1915.

Some 157 men from the regiment died after being gassed, bayoneted or shot when the Germans released chlorine gas into the British lines on the morning of May 24th, 1915.

The youngest British soldier to die in the first World War, John Condon, who was just 14 according to the Commonwealth War Graves Commission, will be remembered at a wreath-laying service in his native Waterford city on Sunday morning.