‘Something very, very big happened ...There was a big mobilisation of the electorate’ 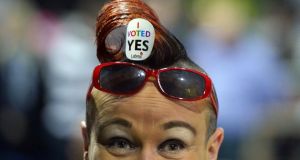 The capital has voted resoundingly in favour of same-sex marriage, with all constituency results declared.

The highest Yes result was delivered in Dublin South East, at 74.91 per cent, and the lowest in Dublin North East, at 66.70.

Labour TD Robert Dowds had early on predicted that Dublin Mid West would say Yes to same-sex marriage marriage by 60-65 per cent, while a final tally in Dublin South East predicted a 74 per cent Yes vote.

According to Senator Ivana Bacik the Ranelagh area was set to vote Yes by 84 per cent and Ringsend would see 82 per cent in favour of Yes. One box in Ranelagh was reported to have seen a 92 per cent vote in favour of same-sex marriage.

With almost 50 per cent of boxes tallied in Dublin South Central, a Yes figure of 73 per cent was recorded.

Minister for Communications Alex White, the Labour Party director of elections, said, in his constituency, polling stations were hitting 70 per cent turnout. “I’d be surprised if Dublin South wasn’t well over 60 per cent.”

He said there appeared to be a similar pattern across Dublin and other urban areas.

The highest turnout in any of the 37 completed referendums since the first in 1937 was 70.6 per cent in 1972 when the electorate voted to join the EEC.

At Citywest in south Dublin Mr White said “something very, very big happened yesterday. There was a big mobilisation of the electorate. How exactly that comes in we don’t know.”

The Minister said a Yes vote “will mean a host of different things. I think as a country, questions about the democracy and the strength of our democracy – it will give the lie to all of that.

“I think people were able to discuss, deliberate on a really difficult issue, do so in a very civil way largely throughout a period of weeks and come to a conclusion in respect of a difficult enough Constitutional question.

“That people can actually settle an issue like that is quite an awesome thing.”

The Minister rejected suggestions that Labour had a low profile in the campaign, despite the pledge made for marriage equality by former tánaiste and party leader Eamon Gilmore.

“Our people have been mobilising this for six weeks. I was always keen as director of elections that we should build a campaign. We always knew that with the main TV and radio debates the interest of the media would be heightened in the last 10 days or two weeks.”

He met people on the campaign trail “who felt that it was almost becoming too much, that the issues had been well ventilated and argued and they just needed time to make up their minds. It’s a bit of a balance, but from Labour’s point of view we were front and centre all along.”

One Yes Equality campaigner said a number of their people were so concerned they might mark their X in the No box that they also voted Yes in the referendum to reduce the age for presidential candidates from 35 to 21, even though they did not support the age change.