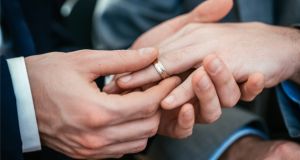 There is almost nothing between the Yes and No sides in the same sex marriage referendum in Donegal South West.

The two Donegal constituencies have voted Yes in the same sex marriage referendum.

In Donegal North East there were shouts of joy as the result was finally read out by returning officer Geraldine O’Connor at the Bonagee Community Centre outside Letterkenny.

The total invalid vote was 191.

In Donegal South West the Yes side won out by a narrow margin with just 33 votes separating the Yes and No sides.