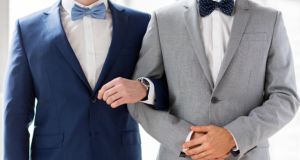 All constituencies Cork and Kerry Voted Yes to same-sex marriage.

A Yes result in the Same-sex Marriage Referendum has been declared in all constituencies in Cork, Kerry and west Limerick.

There were cheers from a handful of Yes Equality campaigners at the Ballincollig count centre where the final result was delivered shortly after 7pm on Saturday.

Cork’s three county constituencies were the last in the country to deliver their results and all three returned Yes results.

GAA star and Yes campaigner Donal Og Cusack’s constituency returned the strongest of the County Cork Yes vote of the three with a resounding 61.72 per cent in favour.

Cork North West, traditionally a conservative constituency, returned a 57.87 per cent Yes vote. Mallow based Minister of State Sean Sherlock said the result “sends a signal to the world”.

He said a former school friend flew home from the US, where he has resided for 20 years, to vote.

Asked how the voter remained on the register, he said he did not know. “I think people still aspire to Catholic values, perhaps we are taking a more tolerant view, perhaps a more Church of Ireland view.

The Church of Ireland has traditionally been more open about social issues. I think Irish people are moving towards those values,” he said. Cork South West returned the closest of the rural Cork vote, with 55.97 per cent voting in favour of the marriage amendment. Louise Roseingrave

In Kerry North - West Limerick and the Kerry South referendums, albeit with a less convincing majority than in many other parts of the country.

In Cork city, Cork South Central confirmed a Yes vote at 65.78 per cent of the total, with No votes constituting 34.22 per cent.