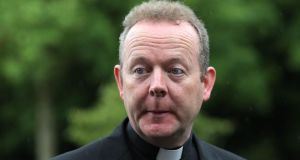 Archbishop Eamon Martin: The Catholic Church was “not here to impose, but to invite people to a personal relationship with Jesus which, in turn, calls them to conversion and change in their lives.” Photograph: Niall Carson/PA Wire

Catholic primate Archbishop Eamon Martin has welcomed the raised awareness of issues faced by gay people that was brought about by the debate surrounding the same-sex referendum.

“Among the many lessons that we as Church can learn from the referendum debate is to re-commit ourselves to the pastoral care of anyone in society who experiences victimisation and stigmatisation,” he said.

Speaking at Knock on Sunday afternoon during a Mass for the Armagh diocesan pilgrimage he said ”we have much, to reflect on, and to learn from the referendum debate about presenting and communicating the Church’s message in the 21st century.

“We earnestly want to find ways of reaching out pastorally to different kinds of families and relationships while at the same time continuing to be advocates for a Christian vision of marriage and for the unique and fundamental contribution to society of the family founded upon the love and marriage of a man and a woman.”

Various commentators since the referendum “suggested that the Church has lost its way. During the past week I have received many messages and letters about the referendum. Some accuse the Church of not doing enough to stop the amendment; others take the opposite view, criticising the Church for trying to stridently to present a message that, they say, was out of touch with the people,” he said.

The Catholic Church contributed its views about the referendum “because we considered it to be an extremely important issue for society. Bishops undertook to inform voters both nationally and locally by explaining, from faith and from reason, the Church’s position on marriage and why we disagreed with changing the meaning of marriage in the Constitution of Ireland. At the same time we emphasised that gay people should always be treated with respect and sensitivity,” he said.

He wished “to affirm those who spoke up courageously and chose to vote in support of the unique union of marriage between a man and a woman and the dignity of difference between male and female. I am also conscious, from the correspondence that I have received, that many people were conflicted about how to vote.

“It is clear from the reaction to the referendum result that many people voted in favour of the amendment believing it to be a way of showing tolerance and respect towards gay people, including family members and friends.”

The changed social and political climate in Ireland “brings new pastoral realities for the Catholic Church which presents us with fresh challenges. We need not be daunted by these challenges, nor stand around like the first disciples staring into the sky.”

In post-referendum Ireland the duty of proclaiming the ‘Gospel of the Family’ and caring for the ‘covenant of marriage’ remains with each member of the Church – lay, ordained or consecrated,” he said.

He hoped and trusted “that the Catholic Church shall continue to have an important voice in discussions in the public square on a range of matters, particularly those relating to human life, the dignity of the person, the family, care for the poor and marginalised, the environment, justice and peace.”

The Catholic Church was “not here to impose, but to invite people to a personal relationship with Jesus which, in turn, calls them to conversion and change in their lives ,” he said.

He wondered whether the Church must, perhaps, “find fresh ways of presenting the timeless and challenging truths of the Gospel to the complexity of today’s world where people are being constantly bombarded with all sorts of contradictory messages.”