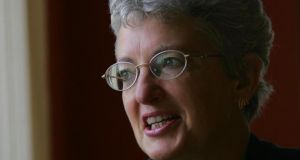 Independent Senator Katherine Zappone: Confessed herself “emotional from the top all the way down to my toes”. Photograph: The Irish Times

Former nun Ann Louise Gilligan accepted an impromptu wedding proposal from her partner Senator Katherine Zappone after she popped the question during a live television interview.

“I said yes to Katherine 12 years ago at our marriage in Canada, ” said Ms Gilligan.

“Now we are bringing the yes back home to Ireland, our country, yes, yes, yes.”

The couple married in Canada in 2003 and went on to fight a series of unsuccessful legal battles in the Irish courts to have their union officially recognised by the State.

Before hundreds of cheering well-wishers Ms Zappone asked her partner to remarry her as she revealed her feelings on the momentous vote.

“I’m feeling emotional from the top all the way down to my toes,” said the Senator.

The couple’s proposal was among other big questions popped during celebrations of the vote, some of which were documented on social media.

Ms Gilligan joined the Loreto order of nuns aged 17 in Ireland, in what she thought was a move that would give her an opportunity to change the world.

“But here I am with Katherine,” she said.

“We are continuing our efforts, but together with the whole of Ireland. It’s not just us, we have done this together.

“This has saved us from prejudice. Today we are free.”

Ms Zappone, originally from Washington state in the US, arrived in Ireland with Ms Gilligan in 1983 and went on to become a chief executive of the National Women’s Council of Ireland and a human rights commissioner.

She was appointed to the Seanad in 2011.

The couple, who have been together since 1981, are also co-founders of An Cosan – Ireland’s largest community education organisation.