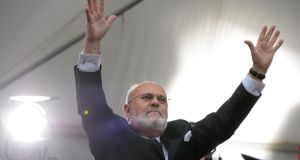 Senator David Norris in the courtyard at Dublin Castle for the result of the referendum on marriage equality. He was praised in the Seanad for his decades-long campaign for gay rights

Independent Senator David Norris has called for “certain anomalies” to be ironed out when legislation is drawn up to give effect to the result of the marriage equality referendum.

Mr Norris, who was praised in the Seanad for his decades-long campaign for gay rights, said the anomalies included pension irregularities.

He also pointed to section 37 of the equality legislation, “which allows schools, at least theoretically, to dismiss people for their lifestyles being in conflict” with the ethos.

NUI Senator Rónán Mullen, who opposed the referendum, said however that “rather than having culture wars, we should consider how we can accommodate different visions of important issues”.

He called for a “generous view in the section 37 debate”, and said it was “important schools of different denominations and ethos are entitled to transmit the values that are dear to them and reflect their foundational ethos and that of the people who send their children to them”.

Fianna Fáil Senator Denis O’Donovan, who described the outcome as a “tsunami victory”, said that, as a practising Catholic, “I believe that unless the Catholic Church takes heed of the seismic shift in Irish society, it will decline further into the abyss.”

He said he would like to see a move in the Catholic Church “to a more centrist position and to an acknowledgment of how society is evolving”.