Irish vote tops German news with politicians saying ‘what the Catholic Irish can do, we can do, too’ 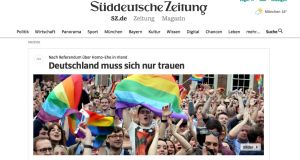 Friday’s vote, and Saturday’s result, generated huge interest in Germany – topping the main evening news and shattering many dearly-held if dusty cliches about the “grüne Insel” or green isle.

Friday’s vote, and Saturday’s result, generated huge interest in Germany – topping the main evening news and shattering many dearly-held if dusty cliches about the “grüne Insel” or green isle.

“It’s time, Frau Merkel,” said Mrs Katrin Göring-Eckardt, co-leader of the Greens in the Bundestag and an influential figure in Germany’s Lutheran church.

The Irish vote was a “great signal: the same love deserves the same respect”, she said, adding she was confident that Germany would soon follow Ireland’s example.

Just how firmly-rooted traditional notions of Ireland are in Germany was clear from the reaction from the progressive wing of Dr Merkel’s ruling centre-right Christian Democratic Union (CDU).

Mr Jens Spahn, the first openly gay CDU politician to serve in the party’s board said that “what the Catholic Irish can do, we can do, too”.

“The populace is often further along in these matters than we think,” he told the Welt daily.

The surprise and delight in Germany at the Irish vote was laced with a tone of impatience. Where Germany once lead the way on gay rights in Europe – introducing same-sex civil partnerships in 2001 – it was now, many fumed, lagging behind.

“Ireland is possible in Germany, if it only dared” - that was the message of Germany’s leading Süddeutsche Zeitung newspaper to its readers after the Irish marriage equality vote.

In a leader its senior writer Heribert Prantl noted that Germany’s registered partnership legislation lacked just one major right to put it on a par with marriage: the right of a same-sex couple to adopt.

“To open marriage for homosexuals requires only courage – the courage of law-makers who have to explicitly anchor this on the statute books; and the courage of the constitutional court, which would have to reject the anticipated challenges.”

The Welt am Sonntag newspaper praised the vote as a “vote of liberation” for the Irish people from the Catholic church and a “day of huge emotion” for the country.

In the end it was the country’s own Catholics, it wrote, who stole the arguments from the hard-line No camp.

“Welt am Sonntag” quoted TV journalist Ursula Halligan’s remark that a yes to same-sex marriage “was the most Christian thing you can do, because the glory of god is in the human being ... to which people belong who are gay”.

Germany’s national broadcast Deutschlandfunk said that Ireland had “buried the cliches about itself”.

In a commentary, Dublin-based journalist Martin Alioth, told listeners that recent years of hardship had revived in Ireland a sense of social solidarity lost in the boom years.

“The result (of the vote) is more than a generous gesture to a minority,” he said, “it is also the wish to define anew Irish society”.