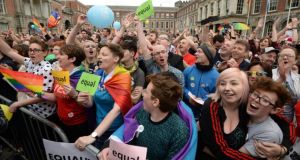 Crowds celebrate at Dublin Castle upon hearing the results of the Referendum on Marriage Equality in May. Photograph: Dara Mac Dónaill/The Irish Times

The legislation giving effect to the marriage equality referendum has been introduced in the Dáil to a round of applause.

Members of the House and those sitting in the public gallery applauded when Minister for Justice Frances Fitzgerald described the Marriage Bill as “momentous’.

Ms Fitzgerald said it also confirmed that marriage was not being changed.

“Couples will go through largely the same arrangements to register a marriage once this Bill has been enacted as on May 21st,’’ she added.

“However, what will have changed fundamentally, as a result of the referendum, is the notion that marriage is the preserve of one group and denied others.’’

Ms Fitzgerald said last May the people of Ireland sent forth to the world a resounding message about Ireland.

“They told the world that Ireland values people in all their diversity,’’ she added. “They reminded the world that families come in many forms and all deserve our support.’’

Members of the Opposition welcomed the Bill.