Many reasons why TD would be in Dáil but not vote, says Donohoe 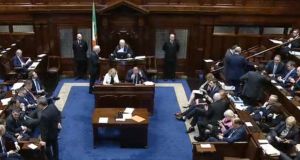 An analysis by RTÉ has found that several TDs record their attendance at Leinster House for expenses purposes on voting days when they do not take part in any votes.

The Dáil’s oversight body should reflect on whether a review is needed into the attendance and expenses system for TDs, the Minister for Finance Paschal Donohoe has said.

An analysis by RTÉ has found that several TDs record their attendance at Leinster House for expenses purposes on voting days when they do not take part in any votes.

Speaking on Thursday morning, Mr Donohoe said that a review of the system is a matter for the Houses of the Oireachtas Commissions.

“Whether a further to review is needed, I think it’s something perhaps the committees that are associated with the running of the House, the Commission of Oireachtas, could have a reflection on. But my own experience is that it is a system that I have seen work, and our other Oireachtas members take very very seriously.”

He said there are many legitimate reasons why a TD would declare themselves present but not vote.

“I was a member of the Public Accounts Committee. When I was in the Public Accounts Committee, I would frequently not go to vote, because if I went to vote it would mean I would not be able to participate in the committee appearance and hearing overall, and could mean you miss important parts of testimony from those who are in front of the committee.

“The second reason could be is that you were involved in meetings, either with constituents or with groups that are in Leinster House.”

Government chief whip Sean Kyne told The Irish Times that some of the TDs who appear towards the top of the list of voting absentees would be called on to act as pairs by the Government when its members are not present in the Dáil.

However, the practice is less common in the current Dáil due to the confidence and supply agreement. Under this deal Fianna Fáil abstains from votes, allowing the minority Government to pass legislation and stay in power.

Mr Kyne said the Healy-Raes, Independent TD Michael Fitzmaurice, as well as Sinn Féin and Labour members would be called on to give a pair if, for example, a Minister was out of the country or indisposed.

However, he said use of the pairing system had become less widespread during this Dáil term, and that it would usually be reserved for use if a large number of government TDs were not available, or on confidence and finance issues.

There have been calls for Dáil reforms to tackle the practice of signing in and not voting.

Green Party leader Eamon Ryan said new rules introduced to encourage members to attend and vote. He suggested curtailing the time set aside for leaders or priority questions for members whose voting record dipped below a certain level.

“I think that’s a more appropriate way of hitting TDs where it hurts. You look to leaders questions to get attention to a key issue, and if you miss a gap in that rota, that would really cause you to buck up,” he said.

David Farrell, professor of politics in UCD, said party leaders “get a degree of a pass” for not being present for votes “but if there are others standing out that is an unfortunate thing and isn’t something that should be encouraged by their own parties”.

He said the issue “provides a really useful opportunity to look hard at how to fix these issues that have come to light.”