‘John Hume is a politician who saw the big picture,’ says Micheál Martin 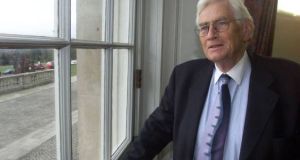 Seamus Mallon: he compared the politics of the DUP and Sinn Féin now to how loyalist paramilitaries and the IRA brought down the Sunning dale power-sharing administration of 1974

The DUP and Sinn Féin have been accused of engaging in “zero sum” politics that neither side can win as the wait for a resolution to a power-sharing stalemate continues.

Former SDLP deputy leader Seamus Mallon compared the politics of the DUP and Sinn Féin now to how loyalist paramilitaries and the IRA brought down the Sunning dale power-sharing administration of 1974.

“For these people the future is binary,” he said. “There must be absolute victory or nothing.”

Mr Mallon was speaking at the Titanic visitor centre on Thursday night at the Belfast launch of Maurice Fitzpatrick’s book John Hume in America, a companion piece to his film In the Name of Peace.

Mr Mallon said that if DUP and Sinn Féin leaders would listen to the advice offered down the years by Mr Hume “it would point them in a different direction” to a place where political accommodation could be reached.

Mr Mallon said that, notwithstanding the political stasis, people should not lose heart. The 1998 Belfast Agreement remained the basis for peace and stability.

Fianna Fáil leader Micheál Martin, who also attended the launch, said the DUP and Sinn Féin could “learn from John Hume’s grander vision” to assist them in breaking the political deadlock and restoring the Northern Executive and Assembly.

“John Hume is a politician who saw the big picture and the big picture at the moment is Brexit and its potential impact on the North and the sets of relationships between Britain and Ireland. John Hume would have immediately got that,” said Mr Martin. “He would have understood that all other issues pale into insignificance when compared to Brexit.”

Mr Martin added: “He had the capacity to think around a problem or impasse and come up with scenarios that would facilitate others to circumnavigate their problems. He was good at that.”

1 David Trimble: After the big dinner in Oslo, somebody said why don’t we party together?
2 Covid-19: ‘Green list’ may shorten as Cabinet looks to tighten travel restrictions
3 Maureen Dowd: The US president and the damage done
4 Tributes to John Hume flood in from Irish and international politicians
5 John Hume, architect of peace process, dies aged 83
Real news has value SUBSCRIBE