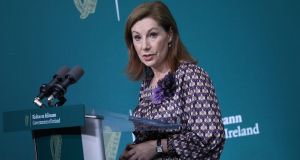 Minister of State with responsibility for Special Education and Inclusion Josepha Madigan: description of children without additional needs as ‘normal’ was widely criticised.

Minister of State for Special Education Josepha Madigan formally apologised for describing children who do not have additional education needs as “normal”.

She also corrected the record of the Dáil and clarified remarks she made in the media about mother and baby homes when speaking about vulnerable children.

A number of opposition TDs had criticised her comments but Ms Madigan insisted that at no stage would she compare two “very different situations”.

During a debate in the House last Thursday about the reopening of special schools Ms Madigan said: “We all know that even for normal children remote teaching is difficult, but for children who have additional needs it is particularly difficult.”

Her description of children without additional needs as “normal” was criticised on social media last week.

The Minister apologised that evening on Twitter but in a personal statement to the Dáil on Wednesday, she said “the word was not appropriate, I did not use it intentionally and it was not what I meant to say.

“While I publicly apologised last Thursday, I wish to restate that apology on the floor of the House. I withdraw the remark and re-emphasise my commitment to supporting children with special educational needs and their families, particularly at this difficult time.”

Earlier, while speaking on the RTÉ Today with Claire Byrne show, the Minister said there was no justifiable reason why schools could not open for students with special needs but the Government had been left with no option.

“We’ve spent the last week talking about mother and baby homes, where our most vulnerable were left to their own devices in less than satisfactory conditions and we’re now allowing further anxiety and upset to be placed on the shoulders of parents whose children desperately need to go back to school.”

Sinn Féin leader Mary Lou McDonald in the Dáil suggested the Taoiseach should advise Ms Madigan that “comparing teachers, SNAs and others - to mother and baby homes is not just crass and clueless, but a vain attempt to shift blame”.

But clarifying her remarks, the Minister said that her comments “pertained to looking after the most vulnerable in our society, including children with special educational needs.

“I meant no more than that. At no stage would I compare these two very different situations.”

Earlier, the Irish National Teachers Organisation (INTO), which opposed this week’s proposed reopening of schools, said the Minister’s comments were “grossly offensive” to its members and requested an immediate apology.

“We call on Minister Madigan to immediately apologise for her insensitive comments this morning,” the INTO said in a statement.

“We are determined to continue working towards a safe reopening of schools and ensure pupils with special needs education return to in-school teaching and learning as soon as possible. The Minister’s comments are unhelpful, unnecessary and grossly offensive to our members.”