Independent Senator David Norris has criticised the Labour Party’s candidate for a vacant Seanad seat, Maíria Cahill, for refusing to answer questions on her former links to a dissident republican group. 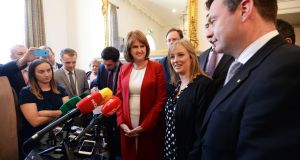 Labour Party Seanad byelection candidate Maíria Cahill has come under increased pressure to clarify her links to a dissident republican group as voting draws to a close.

Fianna Fáil chief whip Seán Ó Fearghaíl and Independent Senator Fidelma Healy Eames called on her to end her silence on her involvement with dissident group, the Republican Network for Unity (RNU). Several other Oireachtas members have already called a clarification.

TDs and Senators are eligible to vote in the byelection caused by the resignation for health reasons of Senator Jimmy Harte. With the backing of Fine Gael and Labour Ms Cahill looks set to win the seat.

She said last year she was the RNU national secretary for a few hours in 2010 and went to meetings for about six months. She maintained she did not oppose the PSNI at any stage. However, this week, Catherine McCartney, a sister of Belfast man Robert McCartney who was killed by IRA members, wrote to Oireachtas members questioning Ms Cahill’s explanation.

“This cannot be regarded as a minor issue or an irrelevance to the appointment to a political office,” said Ms McCartney.

The intervention of Ms McCartney has caused others including Senator David Norris to call for a full explanation of her involvement with the group.

Mr Ó Fearghaíl told Raidió na Gaeltachta:“I would be quite concerned about the matters that have been raised, and I believe that Maíria Cahill should answer publicly the questions that are being asked.”

He said it was clear that “Robert McCartney’s sisters are not happy with her answers to date ... and I don’t see any reason why she couldn’t come out and answer these questions honestly and candidly ... and clear up the issue.”

Similarly Ms Healy-Eames said she had been inclined to vote for Ms Cahill but was concerned she had not addressed this issue. She said she had wrote to Ms Cahill asking for a clarification but had received no response.

“I will not vote for somebody who will not respond to this serious issue.”

A Labour spokesman said that Ms Cahill had fully dealt with these issues in the past and they were on the public record.

Ms Cahill has alleged she was raped by an IRA member and had to face her alleged assailant in a republican-style court.