Maíria Cahill calls for investigation into extent of IRA abuse

Scale of problem should be discovered before all-island investigation begins 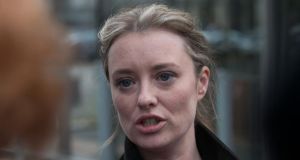 An investigation to determine the extent of sexual abuse by IRA members should happen ahead of any all-island inquiry into the matter, Maíria Cahill has said.

Ms Cahill, who alleges she was raped by a prominent IRA member in Belfast during 1997, has said she is confident the main political parties can establish an inquiry to investigate all abuse allegations.

Gardaí are understood to have received details of allegations relating to as many as 30 IRA members living in the Republic suspected of rape and other sexual assaults.

Responding to reports that the Government is considering a cross-Border inquiry into sexual abuse by IRA members, Ms Cahill said such an inquiry should be preceded by a scoping exercise.

In an email, Ms Cahill said she thought “an investigatory approach would be needed first to try and quantify the scale of the problem”.

She added that if there were additional powers to compel people to give evidence to the inquiry, as well as the power to sequester evidence, that would be the “way forward”. She said she had made representations to all political parties about this.

The idea of a cross-Border inquiry with wide powers has been suggested by Fianna Fáil leader Micheál Martin and Fine Gael TD Regina Doherty. In recent days, a Government source described such an investigation as “potentially the most effective process to get at the truth” but warned of legal obstacles. Sinn Féin leader Gerry Adams has rejected the idea. He has claimed the approach advocated by the Government and Mr Martin would set aside the needs of victims.

He said both the Government and Fianna Fáil had pursued a selective party-political approach to abuse.

He said Northern Ireland Deputy First Minister Martin McGuinness outlined the details of this idea several weeks ago. Mr McGuinness had since then written twice to Taoiseach Enda Kenny, said Mr Adams, but had yet to receive a “substantial reply”.

Ms Cahill confirmed she had been contacted by the office of human rights lawyer Keir Starmer QC.

He is conducting an inquiry into the prosecutorial process followed by the North’s DPP for her case and two others.

None of them proceeded to trial. She is expected to hold a meeting with Mr Starmer by early December.

He is said to have passed the information supplied by a former IRA member to the Garda Síochána.

2 Coronavirus: Number of vaccine doses given in the State passes half a million , Taoiseach says