Budget shows Government’s determination to get Ireland through pandemic -Taoiseach 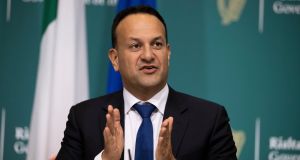 The Government is considering how to transform the Low Pay Commission into a living wage commission to meet its programme for government commitment for a living wage over the Coalition’s term in office.

Tánaiste Leo Varadkar said such a commission would “carry out research and advise us on fair wages in an independent and evidence-based way moving towards a living wage over the period of this Government”.

The current minimum wage is €10.10 and a living wage, an income that makes a minimum acceptable standard of living possible, is set at €12.30.

The minimum wage will rise by 10c to €10.20 following the Government’s acceptance of the Low Pay Commission’s recommendation. Trade union representatives on the commission withdrew following disagreement over raising the rate by 20c or 2 per cent.

Mr Varadkar said “Great Britain and Northern Ireland have a living wage but it is significantly lower than the national minimum wage is here. That’s not a model we would wish to follow.”

Mr Varadkar was speaking during a Dáil debate on Budget 2021, opened by Taoiseach Micheál Martin who described it as a “progressive and ambitious budget” that showed the Government’s absolute determination to get Ireland through the Covid-19 pandemic and to address urgent challenges including health, housing, education, climate change and Brexit.

Insisting that the largest benefit would be felt by lower income families, Mr Martin said “that’s not an empty claim. It’s not a political slogan. It’s an independently verified fact.”

He said the Minister for Social Protection would oversee a record budget next year and the “significant increase in child dependent allowances will help the poorest families most. Increases in the fuel allowance mean that the impact of the carbon tax will be fairer.”

The Taoiseach warned however that at some point “there will be a need to eliminate the budget deficit to build resilience to the next economic shock”.

In the Spring the Government will establish a “medium-term trajectory” towards a balanced budget, at which point there will be “much greater clarity about the lasting impact of the pandemic and the final form of Brexit”.

Green Party leader Eamon Ryan said the way the carbon tax has been introduced this year guarantees that it will be poverty-proofed.

Revenues will be ring-fenced to ensure no deterioration in the situation of people on low income, who face the prospect of fuel poverty.

Insisting that it was not a revenue raising tax, Mr Ryan said about “one third of the revenue will go towards protecting against poverty” with increases in social welfare benefits including fuel, living alone and qualified child allowances, along with funding for retrofitting of homes two thirds of which will go to lower income households.

Sinn Féin leader Mary Lou McDonald said the Government had delivered a “stop-gap budget, one that will see us standing still instead of moving forward”.

Hitting out at Government housing policy she said “I had to rub my eyes in disbelief when I saw that this Budget provides only for 593 real social homes in 2021”.

Ms McDonald added that “the pandemic hasn’t dampened the appetite for change that was so strong during February’s election nor will your lack lustre budget”.