Louth Council: Recount in the Dundalk-Carlingford area at the request of Sinn Féin 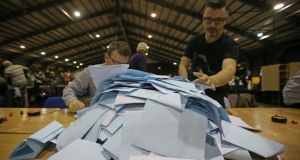 Tallies in Louth suggest of the 10 seats in Drogheda, Sinn Féin, Labour and Fianna Fáil will each take two seats, Fine Gael should take three, and there will be one Independent. Photograph: Niall Carson/PA Wire

There is a complete recount in the Dundalk-Carlingford area at the request of Sinn Féin.

In Drogheda, Independent candidate Julie Feely who decided to stand for election after starting a campaign on social media to force dog owners to “pick up” after their dog, has been eliminated.

She has already said she will stand in the next general election.

Final tallies in Louth suggest that of the 10 seats in Drogheda, Sinn Féin, Labour and Fianna Fáil will each take two seats, Fine Gael should take three, and there will be one Independent seat.

Fianna Fáil Senator Thomas Byrne, who is one of the party’s two candidates in the Midlands North-West European constituency, has said he is hopeful the party will win a seat in the elections.

Speaking at the Louth count centre in Dundalk he said, “I feel very much I am in a shake up for a seat and everything today I am hearing confirms that but we won’t know until the votes are counted.”

Adding that he did not think the party should have stuck to a single candidate, Mr Byrne said “I think we had to play to our strengths, it is a large constituency, both sides of the constituency, so I think the right strategy was adopted and particularly if we get the vote the exit poll predicts that will have been proven the correct strategy.”

In relation to the next general election, Senator Byrne said the party has to, “continue on the path of renewal, this is just one stop on the way. Hopefully we will have a selection of good candidates elected today.”